Mosques are frequently portrayed in popular media in one of two ways: negative or evil. In the best light, mosques are seen as conservative, male-dominated places and in the worst light they are characterized as bastions of terrorism. Neither are true.

Here’s a scene from mosque today where we went to celebrate Eid, the joyous celebration ending the 30-day fast of Ramadan. Since today is a celebration, after prayers, there was drumming and lots of fun.

This mosque is Sufi so they do things differently than many other mosques. For example men and women are mixed at this mosque, which is not very usual. For those who balk at why women and men are separated (as I originally did), once you realize that the form of Muslim prayer is very physical— much more physical than other systems of prayer—you see it makes sense to separate men and women. If not, you have a lot of people’s butts in your face and that can be distracting if you have men and women together! Also note this is just a small scene from mosque today and doesn’t show the chanting, sermon (khotba) and prayers that preceded the celebration but I wanted to demystify mosques a little bit for those who may have never been inside one. 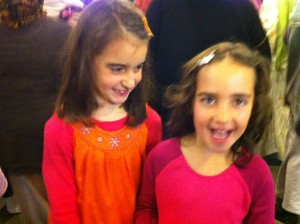 Does Religion Matter? Juggling Two Faiths in One Family