November is Native American Heritage month.  In our family, our eight-year-old daughter has developed a deep fascination for the culture, primarily through books.  Besides the several stories of Squanto and Sacagawea we’ve read together, the books based on “Kaya” of the American Girl series helped sustain her adoration. She is currently reading Scott O’Dell’s “Sing Down the Moon” and I am curious to hear what she thinks of it.

My kids and I have also enjoyed reading many good American Indian stories in picture books based on the culture, including: 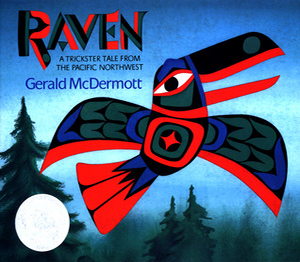 Raven, A Trickster Tale From The Pacific Northwest
by Gerald Mc Dermott – a Caldecott Honor book with great artwork, this legend and mythological tale is about how and who brought light into this world. 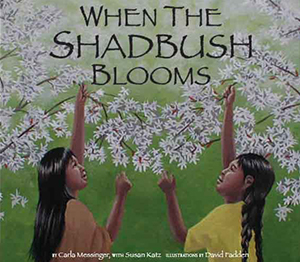 When The Shadbush Blooms
by Carla Messinger, with Susan Katz – with illustrations that juxtapose old times with modern days in the same setting and through the cycle of seasons, kids read and see how life moves on in similar yet different ways for the Lenape people and for all. 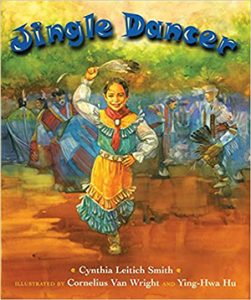 Jingle Dancer
by Cynthia Leitich Smith – a charming story about a contemporary Muscogee (Creek) Nation girl’s collection of jingles to add to her regalia while preparing to dance at the next powwow. 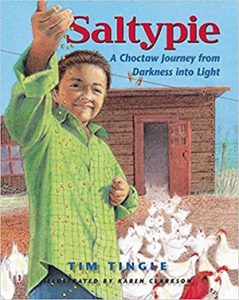 Saltypie, A Choctaw Journey from Darkness into Light
by Tim Tingle – for slightly older kids, this saga spans generations in a Choctaw family as a boy recounts Mawmaw’s (grandmother) difficult past in Oklahoma including a racial attack.

While reading about the heritage month, I also came across articles that discussed the challenges of forced assimilation that some of the Native people face today. Coincidentally, a simple picture book seemed to crystallize this issue.

The book is called “The Journey of Tunuri and the Blue Deer: A Huichol Indian Story” by James Endredy. It is a celebration of an indigenous group called Huichol Indians who live in the Western Sierra Madre mountains of Mexico. While some of the areas they inhabit are accessible, most are in total isolation because of the natural terrain of the region. The author’s note further describes the lives of these people, how the Huichols live in hiding, away from anything progressive. Without electricity, roads and other modern-day amenities, they are able to preserve their age-old beliefs, traditions and lifestyle. To sum up, it is a nature-based culture–people use, apply, worship and sanctify nature in all its forms.

The story in this book is about a small boy Tunuri who is journeying with his family (and his people) to a sacred hilltop. He wanders away and realizes he is lost. But a blue deer, Kuhullumari, befriends him and promises to take him back to his folks. But before that, the blue deer introduces Tunuri to Grandfather Fire who leads him to Father Sun, Mother Earth, Sister Water and Brother Wind. Grandfather Fire also entrusts Tunuri with a bigger responsibility—to take back to his people the message of what he has seen—the sacredness of the new “family” he found in the wild. Kuhullumari later reunites Tunuri with his parents.  The tale brings with it a fair share of adventure, animals, beautiful images, bright colors and things familiar to keep children interested. It is a wonderful book to introduce an indigenous culture to children, one that’s survived modern times.

Perhaps the best part about the book is the images, which are traditional Huichol yarn art. And the illustrators of this book, María Hernández de la Cruz and Casimiro de la Cruz López, are real Huichol artisans who typically work by a candle as the day winds down. In this art, a wooden plank is coated with beeswax and the outline for a drawing is first ‘yarned.’ The inner areas are later filled with colorful yarns, as you can in this link. The beeswax helps the yarns stick to the plank.

You can read more about the Huichols and the author’s own connection to nature and the people here.