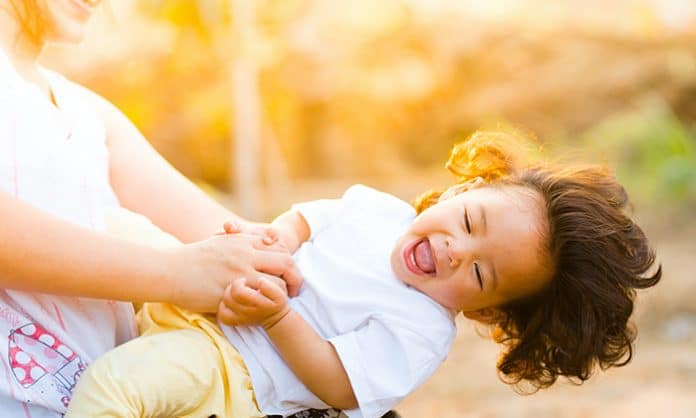 A simple fact of adoption is the likelihood your child will not physically resemble you and your extended family. No well-meaning aunts at the holidays will observe how your son got Grandpa’s nose (poor thing) or how it was lucky the children got their father’s straight teeth, because it could’ve just as easily gone the other way. And in your own quiet moments, you may look at your little one, and although your gaze is full of love and wonder, you may have no existing frame of reference for his beauty because it is unfamiliar to you.

My three-year-old son and I do not look alike. Although we both have brown eyes and are of stubborn temperament, I’m fair-skinned while his skin is the color of coffee with cream. His eyes gently slope upward and his wide, soft cheeks are near impossible to resist squeezing while my deep-set eyes and narrow cheekbones have the look of a gaunt, Eastern European peasant. Our liberal, multicultural city offers no protection from the usual tiresome comments from strangers comments that are frequently heard by any adoptive mother who has gone to the grocery store: So does he look like his father? Where is he from? Is he yours?

When we first met, our son was 10 months old. My husband and I had flown to Guatemala to meet him for the first time and sign some papers that we hoped might accelerate our adoption paperwork, allowing him to come home as soon as possible. That first visit, we had five precious days together, and like any parents with a new child, we tried to unravel the mystery of him. We were not allowed to leave the hotel, so there was nothing to do other than be with him to feed, change, bathe, play and comfort our little one who was not ours yet. Hours vanished as we watched him nap and whispered. There was no doubt in our minds; he was family.

And yet, I confess, as I watched my son sleep, I didn’t understand what made him beautiful. His features, from the shape of his face and eyes to his tuft of wild dark hair, felt completely unlike all the babies I’d known growing up in a small, Midwestern town. I was certain he was cute the hormones of mother-love were already coursing through me and I knew he had to be beautiful (what child isn’t?), but I didn’t know why. Something in his look seemed foreign to me. Further, when he cried, I worried that my appearance frightened him that the oddness of my long arms and pale face were odd and unsettling to him. My foreignness: my face, not to mention my smell, accent and the lilt of my voice were not the sights, sounds or smells that had meant comfort to him for the first ten months of his life, and as my arms adjusted to the ache of his twenty solid pounds, I concluded that it was an enormous act of beneficence on his part to let me lullaby him asleep.

We are all in the States now, and despite the fact I rarely look forward to it, the monthly trip to Target has the potential to be an educational experience. As my son and I cross the parking lot or navigate the aisles, he is noticed and looked at by people whose features echo his own. Young girls nudge their mothers to say look at the cute little boy, while their mothers or grandmothers respond with a gaze that I interpret to mean more than cute baby. The openness, the recognition of their smiles as they gaze at my son and meet his eyes as well as the way they look me over to see if I’m doing a good job seem to say to him you are one of us, beautiful boy.

Now when I look at his baby pictures I am sure he was a beautiful baby. It is so clear: the perfection of his skin, the slope of his eyes, the wideness of his face and cheeks. I can barely remember what it was that I didn’t see clearly from the very beginning, but I know I didn’t see it because I remember the vague shame of not seeing it. What changed?

I wish I could say, and then THIS HAPPENED and then I had an epiphany a sort-of cosmic bang to the head that knocked away the years of passively absorbing dominant cultural images. But that didn’t happen.

Although I’m unsure how my notion of beauty expanded, I suspect one element was how familiarity worked on me with its small, intimate, daily increments: moments of wrapping your dear one in a towel or the fear of the smallest injury to his precious skin. And then there’s the attunement one develops to her child’s cries, breathing, laughter or long, mischievous silences, and the constant gratitude and wonderment when you look at his face that he is here, with you, in the world.

But the beauty of my son is no exception. It is the rule. That was the elementary truth the women at Target gave me. They saw my son and responded to his beauty because it reflected the beauty they have known, and their gazes instructed my own. And now I see their children, small and grown, with more depth. I see their beauty.

I have been scolded by a friend, a man who has navigated racism in the U.S. all his life, that I have no idea, no idea. And he’s right, of course. I have no idea. Someday, probably sooner than I think, my precioso will be a young man navigating a complicated and often ugly world without me and will return to the supper table with a deep voice to tell me the same thing: Mother, you have no idea.

I know the ugliness of the world is still there, but for now, while my little one is still small, let me push him in his stroller and smile at the heavy boy approaching us. His hair spiky and his cheeks wide, his eyes dark and uninterested in me. Let me catch his eye, nod hello and smile with the wonder of seeing him. Of knowing he is beautiful.