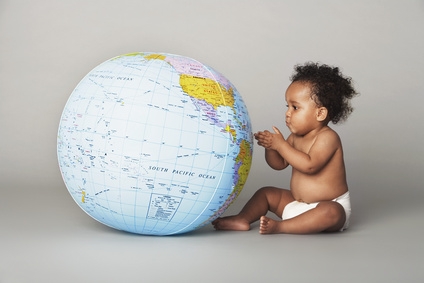 Welcome to my blog! I am bringing up my children, Schmoo and Pan-Pan, to speak three languages: English, Twi and French. I started learning French at school (age 11) and loved it so much I ended up studying it to MA level (age 26). So after all those years of struggling to learn another language I wanted to give my kids the easy option! As my husband grew up in Ghana, he speaks fluent Twi, so it was easy to add this third language into the mix. We use the OPOL method (One Person One Language), so I speak to the children in French and Ed (hubby) speaks to them in Twi. They speak English with everyone else. Schmoo is now four and a balanced bilingual with French, plus a good passive knowledge of Twi. Pan-Pan, now two, is just starting to speak and has words in all three languages.

My mother tongue is English and we live in the UK, but I’ve always been fascinated by languages and learnt German as well as French at university. However, when we had Schmoo, I hadn’t spoken either language since finishing my studies (about five years previously), so I was getting quite rusty! Ed speaks a couple of African languages as well as mother-tongue English, but at first we decided it would be best if he spoke English with the children, as there would be little support for these lesser-spoken languages later on.
I decided pretty much straight away to speak French over German with Schmoo (I’ve always been slightly more fluent in French than German, because I learnt it from an earlier age). I began by just reading French books to her, because I was worried about her picking up my mistakes, but as I started to remember forgotten words and learn new ones I got more confident and, realising that a few stories wouldn’t do the trick, I began speaking to her in French for about half the day. I only spoke French half the time because I noticed that sometimes I couldn’t express myself adequately in French or make quick little jokes as I would in English, and I felt that it was blocking my communication with her.
However, a little research indicated that it is better for one parent to speak the minority language all the time, so I took the decision to switch to full-time French, hoping that my vocab would stay one step ahead of Schmoo’s!

It was very quickly rewarding. By the age of one and a half, Schmoo could understand simple instructions in French and English. Her most used word was ‘encore’, which means ‘more’! At 2, her mother tongue was clearly French, although she understood English to a good level. She began to put words together to make simple sentences and understood that Daddy speaks English, while Maman speaks French. At 3 she started nursery, which is where a lot of families can start to have trouble maintaining the minority language, but we were lucky as Schmoo’s nursery was bilingual with French. Her beloved teacher spoke both languages, which really helped.

She was very resourceful in getting what she wanted–she generally tried to speak French to people first, then if they didn’t appear to understand, would try out English. She always spoke French when playing by herself. She didn’t seem to object when I spoke English with Ed, although she was starting to notice that I understand the language and tried out a few words with me (I always responded in French). Now she only speaks to me in French; in fact, she insists on it! Now she and Pan-Pan speak French with each other about 90% of the time.