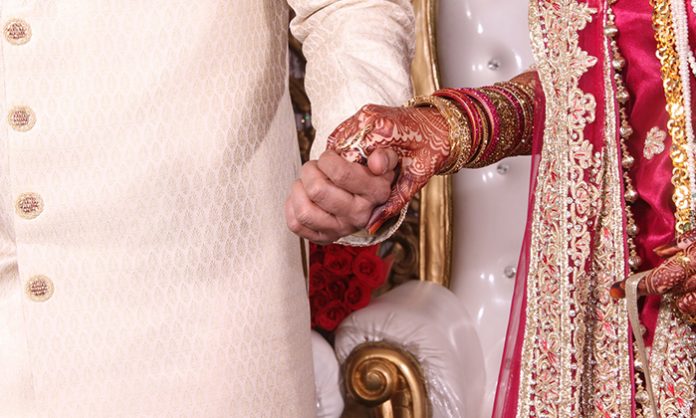 I’ve realized the term “love marriage” is absent in the West. In India and a few other countries in South Asia, it would denote one of the two possible ways leading to a union, the other being arranged marriage.

Love is probably the last thing on the checklist when two people are arranged to live together for the rest of their lives. Strange but true. Horoscopes, socioeconomic class, faith and geographical priorities are matched before anything else, even physical attributes. All this is enabled by the résumé—a summary of employment, caste, and academic and birth details, including a small pictorial chart of the planetary positions at the “candidate’s” birth. Classically, a résumé is floated by the partner-seeking family. Most of these procedural steps have replaced the traditional word-of-mouth from olden times and, have almost gone paperless today as with anything else. It was also not uncommon to hire an agent, a marriage-broker, not too long ago; he has now become nearly extinct.

Relatives, friends and neighbors typically play a brief cameo in initiating interest in a particular family. Photographs are exchanged as the last piece of the jigsaw. If that doesn’t get vetoed, then comes the next phase: communication. All along, the shortlisted candidates and their families are researched and background-checked. The final stage is the rendezvous. This is a significant milestone. Families meet, usually at the girl’s home, for snacks and beverage. Certain food items are typically served on this occasion. Another interesting detail is that traditionally, a girl would be expected to display a talent (usually sing, dance or play an instrument) to win the hearts of the visiting bachelor and his people. This, I guarantee, is obsolete now.

At this stage, with both parties meeting for the first time at the girl’s house, things get creative. The permutations of scenarios could be plenty. In some cases, the boy and the girl would step aside, to a different room in the house for a quick or lengthy chat. Sometimes they may go for a drive and come back with a decision. The parents then take things further. Sometimes, if the boy was living abroad, situations could transpire even in his absence. And sometimes if the families are head over heels with each other, it could culminate in an engagement right then and there.

My own case was atypical. After all the paperwork was done, my family agreed to send me on what might be termed a blind date, with my then prospective-husband. He had requested this, so we could save some drama in something that might not have a future. My family was sold on this idea. My in-laws met me for the first time much later, even as the engagement plans were underway. This sequence of events is a rarity. Three months later we had a wedding.

Nowadays, finding a partner online with parental consent and promptly handing it over to them at an appropriate point is within tolerable limits of the concept. Scanning classifieds of newspapers and magazines is also a common trend. Parents are also increasingly on marriage websites. In some rare cases, the couple might not even see each other in the flesh until the altar. Although in recent times, they have the luxury of wrapping themselves around everything electronic to bridge the physical separation. So you see, the scenarios to arrange a marriage are endless. As long as there is no courtship or dating prior to being engaged, it is labeled “arranged”.

One common misconception is that the bride and groom have no choice or say. An arranged marriage is not a forced marriage. The boy or the girl could stall or walk away at any stage of the proceedings (of course with justification). Parents might have been very pushy a few decades ago, but in most cases, parents are understanding and carry a wish-list put together by their son or daughter before they set out to hunt. Men and women could meet multiple individuals before they settle. It is not time-bound either. Also, this process refers to adults to be married; child marriages, although not eradicated, are less prevalent in modern India, and again, are not to be confused with arranged marriages.

While it might still seem weird, unconvincing and irrational even with the modern forms, an arranged marriage is perhaps only as wild and whimsical as love at first sight. I am sure even as you read (and as I write) it’s very easy to come up with a long list of flaws. But in its defense, it is time-tested and pragmatic. It stems from the belief that all factors conducive for love to develop between the two individuals have been addressed. Advocates of arranged marriages might argue that the chances for infatuation taking over rationale in picking a partner are minimized and that parents who look out for their children all their lives cannot do harm or go wrong. As for the excitement factor that might seemingly be missing in these marriages, leapfrogging and moving in with a stranger should pump enough adrenaline. In my case, I moved to a new life in the U.S. to join my husband immediately after our marriage.

Yes, this could pose sufficient potential for disaster. But doesn’t finding a partner oneself come with risks as well? Aren’t we taking chances in a relationship when we believe it is more than a crush or when we rely on our instincts? Either way, ultimately the stars have to line up. With any marriage, there is hard work to be done. Customizing and sorting through the hand-picked peripheral issues probably counterbalances the gamble of not knowing the individual very well. And the standard of commitment in a marriage set by Indian society, nurtures the institution in spite of the incompatibilities. Still, there is no dearth of marriages that have been meticulously arranged only to crumble beyond repair.
The practice of arranged marriages is tightly integrated into the cultural and traditional fabric of life in India, and it seems to thrive. I would guess its success rate might not be the same if randomly plugged into a different culture or if experimented with in isolation. But even in India, rebels of arranged marriage are growing.

The influence of the West is powerful; parents are more open to unconventional ways, and divorce rates are on the rise. It will be interesting to watch how the centuries-old custom will defend itself; how long will it be sustained? Or will the newfound appreciation for anything vintage tempt the West to experiment—can mom play matchmaker? Maybe the two constantly evolving trends will meet each other midway for one universal protocol for matrimony.

I have welcomed a horde of questions on this subject since moving to the West more than a decade ago. I have also accommodated a gamut of reactions from sympathy to shock on sharing my personal story. Sometimes people are pleasantly surprised to know that I have been happily married for 12 years. However, in this article, I did not intend to prove that arranged marriages yield a better outcome or to suggest that other ways of the world are inferior. I simply wanted to rectify misconceptions and demystify this practice from my culture.

Photo by Saad on Unsplash