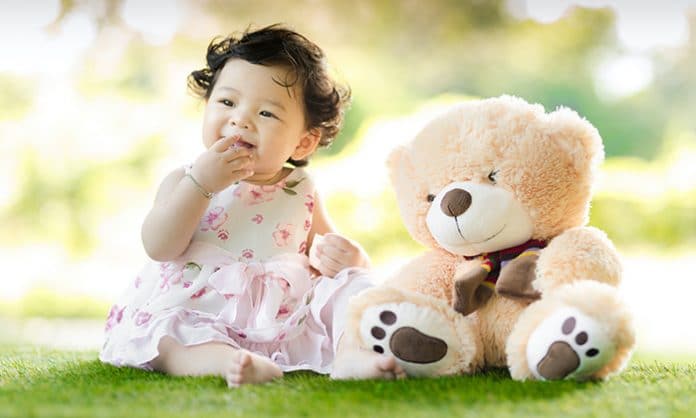 Last week, we learned that our son Jin has been telling his teacher that he has a baby sister, named Quesadilla. Jin does not have any siblings. He has what in my opinion is a spectacular imagination.
For Jin, nothing is what it seems–a purple block is a salt shaker, a salt shaker is a strawberry smoothie and his blankets are his babies. He cares for these babies, feeds them, and rocks them to sleep. I love his imagination, not just because it means we really don’t have to spend money on toys for him (he really would be happier playing with a cardboard box than with the actual “thing” inside it), but also because his world of imaginative play gives me a little window into the workings of his mind.
Recently though, Jin’s imagination gave me my first taste of the nuances of parenting an adopted child. Jin has started to put his blankets in his shirt so they can be “in his tummy.” After about two weeks, I decided to tell him that, in real life, boys can’t grow babies in their tummy; only women can carry babies. Of course, biological fact should not get in the way of pretend play, and he continued playing.
After my very elementary biology lesson, I felt badly that I hadn’t addressed adoption when I talked about babies in women’s tummies. We talk about adoption with Jin a lot. He knows his adoption story and that he looks different than his mom and dad. But, I wasn’t sure if Jin had made the connection that since he was adopted, he was never in “my tummy.” He had never asked about this, but I thought that his current obsession with babies in tummies might be a good starting point for the conversation.
One morning as I was getting ready for work, Jin had his blankets all stuffed up in his shirt and asked me why boys can’t have babies. I stopped applying my mascara, paused, and went for it. “Well,” I said, “there all types of families, Jin. Some families have babies who were carried in their mommy’s tummy. Some families, like our family, have babies who were carried by one mommy and the baby was adopted by another mommy and daddy.” (I know, I didn’t even raise the important point that not all families are comprised of mommies and daddies; I was trying to keep the variables of family differences to a minimum just for the purposes of this conversation.) Mind you, I gave myself the added pressure of thinking that this is my one shot to make sure Jin understands adoption, recognizes that every family is different and, most importantly, knows that he is loved. That’s a lot to handle before my second cup of coffee.
While I was engaged in my brief monologue, Jin was half-paying attention, cuddling with his blankets and cooing to them. Once I finished, I asked him if he had any questions about families and babies. He replied, “These are my babies.” I wondered if he had heard a thing I said or if I truly screwed up my one shot.
A few weeks later, I was again getting ready for work when Jin told me that he wanted to go to Korea. He said he wanted to see from where mommy and daddy adopted him. This was the first time Jin had initiated a conversation about being adopted. Usually, my husband and I are the ones talking to Jin about adoption, asking him probing questions about pictures of his foster parents or the South Korean flag. I can’t be certain that Jin’s comment means he truly understands adoption, but it seems like an important first step. Next step: explaining that men can’t biologically carry children.