When the days grow shorter and the temperature decreases so much so that you see yourself breathing outside, then it’s that time of year when you need the right beverage to warm you up from the inside. This winter beverage is glühwein in German, literally glow wine or hot wine punch would be the loose English translation. Glühwein is popular in all the German-speaking countries, the Netherlands and the Alsace region of France as a traditional holiday drink.
The secret of glühwein is the more you heat it up, the less alcohol remains in. In other words if you want to make it a spiritual drink for adults you should make sure that the glühwein is not boiling. Now how to prepare such a magic potion?
Ingredients:
1 to 2 bottles of red wine (just take your average bottle–nothing fancy but not too cheap either. Glühwein is not for small portions, it’s for a crowd so you should be making 2 bottles of it ideally. And if you want a non-alcoholic version, see the Notes and Modifications section at the end.)
1 to 2 lemons
1 to 3 oranges
5 to 10 tablespoons of sugar
1 to 2 cinnamon sticks
Star anise
Dash of coriander seeds
Dash of cloves
Instructions:
You need a large pot which is big enough for your 2 bottles. Slowly warm the wine on low. Squeeze in the juice from two lemons. Slice three middle sized oranges and put them into the pot. They will immediately take the color of the wine–looks nice. Add the spices. You don’t need too much spice–use the quantities you like.
If you slowly heat the glühwein, it releases that magic smell of winter and Christmas–can you almost smell it? Heat it so that it is really hot but not boiling. Glühwein is served in mugs and is best served to crowds of nice people in the cold. This warms them right up. Just be prepared they will soon ask for a refill. That is how winter tastes!
Notes and Modifications:
In case you want to reduce or eliminate the alcohol, the principle is absolutely the same with one exception: you increase the temperature so the mixture lightly boils for ten minutes. The alcohol will have vanished but not the taste so that glühwein can also be served to minors. Even people served this version will soon ask for a refill of their mugs.
Submitted by Matthias Hitzel, Frankfurt am Main, Germany 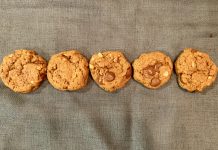