As an adult who is embarrassingly monolingual, I never stop lamenting the “what if” of truly learning and assimilating a foreign language to the point of fluency. Sure, I took a year of Spanish in high school and a year of German in college, but all that’s left me with is a smattering of confused pidgin phrases tumbling around in my head.

Now that I’m living in Thailand, I’m confronted with the extra challenge of a tonal language, and I’m picking it up at a snail’s pace. When dining out, all I can manage when asking for water and rice are two single syllable words punctuated with the polite ka at the end. There is no Thai reference available when my brain attempts to insert a conjunction to make this phrase something more than a regurgitation of nouns, and I find myself groping at memories of German class. This mishmash of foreign words doesn’t do me much good.

Then there are the tones to consider. For instance, ma, ma, and ma can mean ‘dog’, ‘horse’, or ‘come’ based on a slight variation in timbre. Luckily, I’m redeemed from my inability to pick up on the tonal subtleties of Thai words by my two-year-old son, Noah. He putters around happily and fluently communing with the local Thai people like a natural, and never fails to induce swoons when he places his palms together in the traditional Thai wai and bows with a “Sawadeekap!” The farang galuk (foreigner baby), with his curly blonde hair and blue eyes, is something of a mini celebrity; his pitch-perfect Thai doesn’t hurt either.

Preparing for a trip to his favorite destination, 7-Eleven, he leans out of the truck window and points like the hardiest of navigators in the direction of his target. “Bai Seh-Ven! (Go to 7-Eleven!)” he proclaims, as the truck rumbles off down the dirt driveway. Once there, the keen saleslady asks in English, “What is your name?” He replies brazenly in his second language with, “Pu Thai!” (I speak Thai!) All this and he couldn’t begin to tell you what his name actually is, whether you ask him in Thai or English.

Aside from the comic relief, his sponge-like ability to pick up the language of the country in which we find ourselves has dramatically increased my capacity to communicate as well. When he comes home from spending time with his nanny, who he calls Pa or Auntie, he invariably has a handful of new phrases to try out on mom. His favorite lately is “Ya Hed, mama!” (don’t do!) whenever I restrain him to wipe his dribbly chin or give him one too many kisses for his liking.

Another verbal necessity is his absolute favorite treat, a Thai staple which babies seem to live off of for their first year or two or life; cow neow (sticky rice). If we sit down at a restaurant, it’s the first thing he says to the waitress, who is usually already enamored by his coquettish ways. His Thai friends have trained him to entertain; they beckon “Ta wan, No-ah!” (sweet eyes) and he flaps his eyelashes like a demure angel.

Lucky for me, his two-year-old sentences and basic language skills are right at my level. I’ve taken to speaking Thai with him in order to practice, and he always understands my simplistic phrases. He even corrects me when I’m off-tone. Of course, his Thai skills are miles above mine and I can only expect that trend to continue; it’s simply in a kid’s nature to effortlessly pick up the language in which he is immersed. For me, it’s going to take a lot more practice. Despite the handicaps to developing my Thai language skills, the vocabulary Noah brings home with him continues to explode, and I reap the benefits of having a charmingly bilingual toddler.

The most significant of these is the common ground it creates between myself and the Thai community. Whereas I might be just another farang stranger without him, Noah breaks the barriers that language would otherwise impose. I can’t share a conversation with many of the Thai people he has come to love, but our shared affection for him gives us some common ground. We laugh together at his antics and smile knowingly at each other when we notice he’s drifting off to sleep. This familial connection with the local Thai people is something only a child could have created; all the language skills in the world are no substitute. 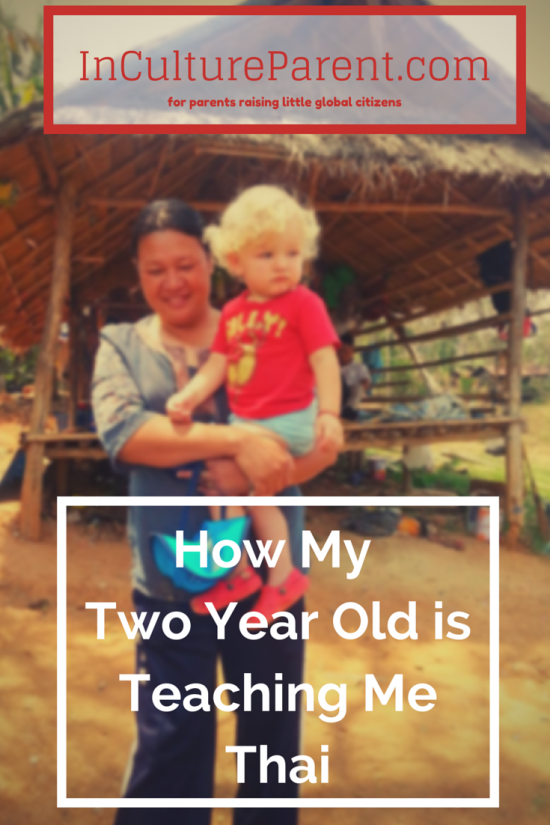