Hurray for Three Kings’ Day by Lori Marie Carlson (author) and Ed Martinez (illustrator) tells the story of the Three Kings tradition through the eyes of little sister Anita, Tito and Tomás. Although we read this book in English, it is also available in Spanish. 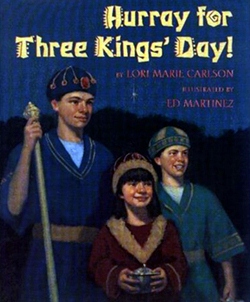 In the introductory note, the author explains that she has combined different Latino Three Kings traditions to make the book appeal to various groups that celebrate the holiday. The opening scene shows the three siblings participating in the Three Kings procession in their town, followed by their going door-to-door, visiting friends and family while looking for “the baby” at each person’s house. As someone who does not celebrate Three Kings, I felt the book could have done a better job of putting this part of the tradition in context. One of the neighbors visited is a baker and he serves the kids butter cookies in the shape of pigs. I was left wondering if the pigs had any significance or this was just random (my guess is random but I wasn’t sure).

After the procession, the children return home to leave their shoes out, as well as food and water for the camels, for the kings to leave gifts. They awaken to all sorts of presents on January 6. This part of the book I felt succeeded in depicting the Three Kings traditions to an outsider. Spoiler alert: if your little one still believes that camels and the kings come to leave gifts, older brothers Tito and Tomás tease Anita for being such a baby who still believes in the camels, so you may want to skip over those lines if you don’t want to spoil the fun.

There was one question I had about the book (or it could also be my own ignorance) and that is with the illustration of the rosca de reyes, a traditional bread enjoyed on the holiday. The bread is described as a honey cake, and pictured as a cake with frosting, rather than the traditional round bread with candied fruit with which I am familiar. I am unsure if some countries have this sort of frosting cake for the rosca de reyes, but I wondered if it could have been an illustration error.

Since we brought this book home from the library, my almost five-year-old has asked to read it every night, which has warmed me up to the book as well. All in all, it’s a cute story, despite some of my questions, with definite kid appeal.

Looking for more books on Three Kings Day? Spanglish Baby has put together a great list of many Three Kings titles.