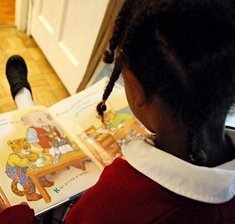 A hot topic for parents trying to raise balanced bilinguals is which language do you teach first, the minority one or the community language? Or maybe both at once?! We didn’t have much choice, as our daughter was enrolled (reluctantly) in the English section of her French school for the first two years, due to lack of places on the French side, so all her initial reading was in English. She learnt the alphabet the phonic way, using the Letterland system, and with a bit of help from our big rubber alphabet mat at home. Then she was taught to string those letter sounds together to make her first words.

All seemed to be going well until she switched across to the French section after two years and the teacher told me she was reading French ‘like English’! In English most letters are pronounced, but in French there are many silent letter traps. In fact, reading in French is generally taught syllable by syllable instead of letter by letter; it was a whole new ball game. I realised she needed a bit of help at home. We started practising her French reading—with me a little worried to correct her pronunciation in my poor accent— and learning the French syllable sounds with a book called Balthazar Decouvre Les Phonemes, featuring a cute, androgynous character in a pointy, blue cap.

When she moved to CP (equivalent to Year 2 in the U.K., 1st grade in the U.S.), she was put in the ‘reading group’ of the class, and immediately given A4 sheets of tiny cursive writing to read for homework. I’ve since discovered that the main objective in CP is to get the children reading, but at the time it was a bit daunting. Luckily her level slowly improved over the year and now she can finally read on her own for fun. In fact, we hear her screaming with laughter at her Garfield cartoon book (I have a French version) late at night when she is supposed to be asleep. Comic books are a big part of French culture and there is a lot more than just Tintin and Asterix, the only ones that seem well known here. She adores her Toto book, a comic about a boy who is pretty naughty at school!

With Pan-Pan, I have a different challenge, as he has gone straight into the French section and won’t be taught to read at all until CP, in three years. I’ve decided to go ahead and teach him to read in English, as I’d like him to have a heads up and be really comfortable with books by the time he gets there, as Schmoo was. Saying that, a friend of mine whose daughter is in a bilingual school told me they always teach the children to read in French first, as it’s more challenging. If they learn in English first they can find reading in French tricky. They also never teach the children to read in both languages at once, as this has apparently been shown to cause confusion.