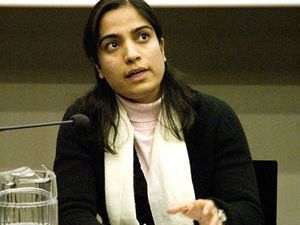 My daughter’s school has asked us to help contribute to an exhibit they are going to hold in the library on great female figures, either historical or someone in your family. I picked Malalai Joya to present because she’s one of the most badass women alive. With unflinching bravery, Joya has stood up for women’s rights in Afghanistan and spoken about the state of affairs of her country, overrun by warlords and corruption. Because of her outspoken critiques of the power structure and certain political figures in Afghanistan, she has been living with death threats for years. She has not even publicly disclosed the name of her husband, as she fears for his safety. In 2010, Time magazine named Malalai Joya as one of the 100 most influential people in the world.

I have also noticed how infrequently Muslim women are represented in these types of exhibits so it was also important to me also to pick a powerful figure from the Muslim world to give my girls a positive role model of a Muslim woman speaking up for what she believes. Her courage to speak her mind in a place where she can be killed for doing so, is downright awe-inspiring. She deserves roomfulls of standing ovations and praise. At the very least, I hope more people get to know and appreciate her. Regardless of her faith or background, I would have picked her as a good role model. That she happens to be Muslim, is an added bonus in my view for my Muslim kids.

Watch this video if you haven’t already, and tell me this isn’t one of the most courageous people on this planet? (This was the first video I ever watched of her when my husband first introduced me to Joya. He’s also a big fan.)