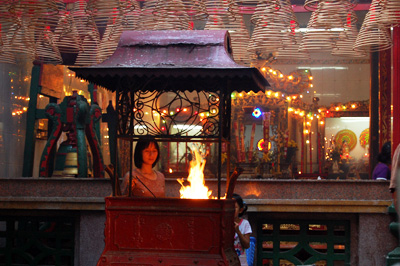 As a first generation American, you always watched other families sitting around a Christmas tree or carving a turkey, consoled by watching reruns of “It’s a Wonderful Life.” But Chinese New Year—that was different. That was my holiday, the one that made waking up early exciting, slowly lulled awake by the smells of burning incense, and the 10 special dishes my mom prepared, dishes with names that alluded to prosperity and luck. In a new society where new roots had to be established, it was the holiday that rooted us the most—harking back to the generations before who observed it with the same rituals: the fire crackers, the lacquer-red tones, the thimble-sized wine cups placed before ancestors, the four-word benedictions wished upon children by adults. It is the day on which family gather and truly appreciate each other, forgiving each other for petty grievances of years past.

This year is the Year of the Black Snake, the sixth sign in the Chinese zodiac. This 2013 Year of Snake symbolizes steady progress and attention to detail. Focus and discipline will be necessary for you to achieve what you set out to create.  People born in the Year of the Snake are reputed to be thoughtful and wise and to approach problems rationally and logically, seldom instinctively. Such people are complex beings, they are clever and often on the quiet side. Their business is always going well, but they sometimes can be stingy.  If anyone has a sixth sense, it’s those born in the Snake Year. People born in the Snake Year love to appreciate beauty.

Instead of celebrating with my family in New York’s Chinatown, for the past nearly five years I have spent the Lunar New Year in Myanmar. Myanmar is a Buddhist country, officially with 3% Chinese population or about 1.6 million.  In Yangon, the former capital where I am based, there is a bustling Chinatown dominated by two main ethnic groups–Cantonese and Fujianese–and a couple of smaller ones. In years past, this neighborhood was marked by divisions and violent clan fights. Two Buddhist temples with very different architecture stand at opposite ends of the neighborhood, marking the divide.  Today, it is a much calmer scene, and Chinese New Year brings out the procession of drums and cymbals, the dancing dragons, the bright orange, red and gold hues, and the special sweets that are made just for this occasion.  Thinking of home, I often head to the Cantonese Guanyin Goddess of Mercy temple, speak to the temple keepers, light incense sticks and watch families come in to consult their fates with the temple wise men.

In the evening, I will dine with a Chinese Burmese family that has the habit of hiring its own troupe of lion dancers.  As I think of my own family this day, I am also grateful for the new friends and networks that have filled my life in my second home