By the age of four, I had lived in three different countries and spoke pieces of three different languages. I was born in the former Soviet Union to an East German father and a Peruvian mother. My parents were university students in present day Ukraine and they communicated with each other in their only common language at that time, Russian. My first words were in Russian, although my father always addressed me in German and my mother in Spanish. My speaking Russian, the surrounding language, before my parents’ languages, is a pattern I have come to recognize in my own children. In my experience and research, the surrounding language where you live tends to be the dominant force in shaping the language the children speak most fluently. The family language is then second, followed by the individual languages that the parents speak to the children.

At the age of two, I was sent to my grandfather’s in Lima, Peru while my parents finished their studies. In Lima, I forgot Russian and German and became fluent in Spanish, the surrounding language. At age four, my mother moved me to Germany where German became what I consider to be my “first” language. I did not completely forget Spanish but I ceased to speak it. At some point I was able to understand nearly everything but unable to speak it properly.

Due to family problems, my mother decided to move back to Peru when I was nine years old and my sister was six. In Peru, my sister and I quickly learned to speak Spanish and my Peruvian family is amused to this day when they remember how my sister and I spoke Spanish to each other with a heavy German accent in the beginning (same as my four-year-old daughter today). We spent only six months in Peru before moving to Berkeley, California, where we had family. It only took us six months to speak in perfect American English. My mother remembers that people wouldn’t believe that my sister and I were her kids because we spoke fluent English with each other. Our source of English was school. At the same time, we perfected our Spanish since we lived in a Mexican neighborhood and everyone around us spoke Spanish, and we forgot most of our German. With the help of letters to and from my father who had stayed in Germany and whose letters were my only source of German, I was able to mostly understand but speak very little German. My sister forgot German completely.

When we moved back to Germany two years later, I was like a movie star to my East German classmates–the only one who had lived in America and spoke fluent English. Unlike today, it was unusual for people to speak fluent English in Germany in the 1980s, even less so in East Germany. However, after the wall came down, traveling to the USA ceased to be something special, although I continued to be the best English speaker in class and university for years. Unfortunately, I slowly lost my American accent and adopted a more German one.

My family and surrounding language experiences confirm theories I have read about the different language levels and types within a family. They can be defined as follows: 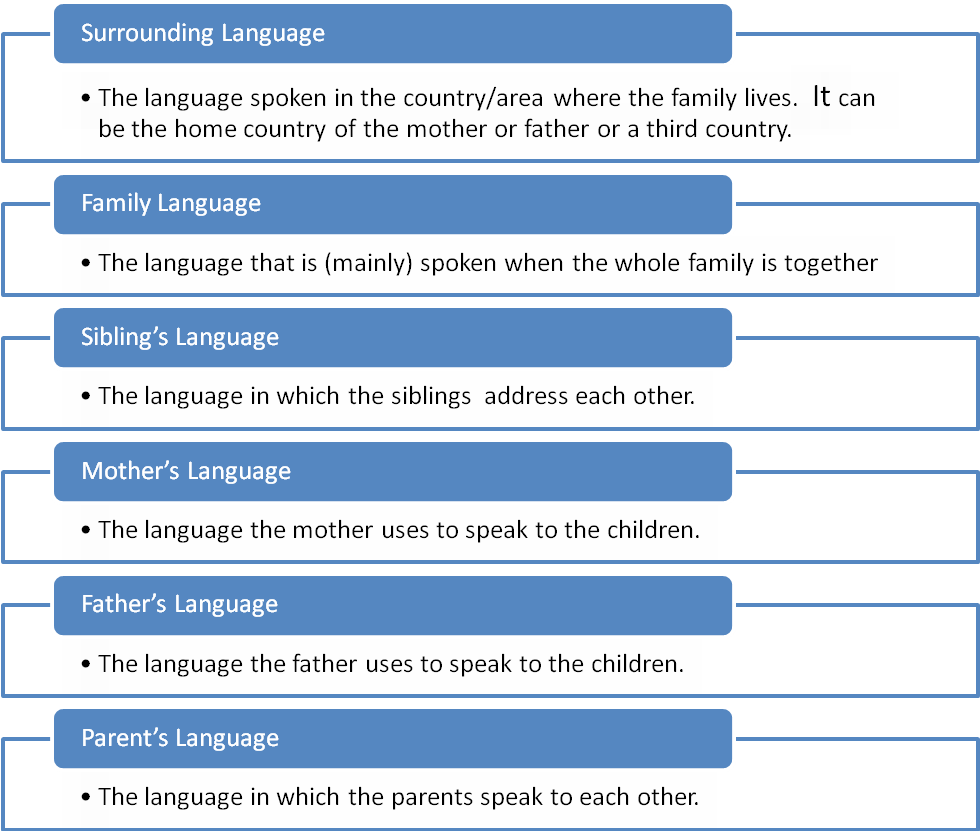 My first child lived in six countries by the age of four, much like myself. Mauricio was born in Bolivia where I was working. Language never posed a difficulty for us there as my wife, Grace, is Peruvian. Spanish was the surrounding language as well as our family language. However, when Mauricio was three months old, my job sent our family to Armenia where language became a central issue for our family. While I could get by with some Russian (which I learned from six years of school in East Germany) in Armenia, it took my wife several months to be able to communicate in a mix of Armenian/Russian and largely English. However Spanish remained our family language. Because it was important to me that my children could communicate with all their grandparents in their respective languages, we decided that I should speak German to our son while Grace speak Spanish. It was also important to us to start very early because once you develop the habit of speaking in one language, it becomes very hard to change.

My job later took us to Lithuania, Romania, and Latvia where Mauricio attended English-speaking kindergarten. We continued speaking Spanish and German to him at home and he naturally picked up English in kindergarten as well as words and phrases of the respective languages of the countries we lived in. By the age of four, Mauricio spoke English better than German or Spanish since English was his surrounding language.

Nearly a year after the birth of our second child in Latvia, we returned to Germany. Again this posed another language dilemma for our family. How would we continue with Mauricio’s English if he attended German schools? Originally, I planned to continue cultivating his English by switching from German to English with him. However, he was having problems with German grammar. Since the correct use of grammatical cases and tenses is of great importance for comprehensibility in German, at times his speech was unintelligible even to me.

Currently and for the past few years it has been intensively discussed in the German media whether children with an immigrant background should learn more German because children without a proper command of the German language experience greater disadvantages when attending school. Because of all these reasons, I decided to abandon the idea of speaking English to our son in order to focus on his German. Nevertheless, I continue reading to him in English and we watch movies and cartoons in English. He understands them very well and is able to tell me what happened in the movie afterwards. When we have English-speaking guests, he is quickly able to adapt to the situation and communicates in English.

In the end, our once multilingual child is growing up bilingual at the moment as multilingualism posed its own set of difficulties when we returned to Germany. My wife continues speaking with both children in Spanish and I continue with German. Our family language however has changed from Spanish to German. Because the dominant language around them is now German, the children speak to each other in German.

Over the years, these languages can change, depending on the circumstances as they already have in our family and did over the course of my own life. What I notice remains constant is how much the surrounding language impacts the other languages. For me, it was always the surrounding language which had the greatest impact on my language fluency growing up. I know that the gift of language is one of the greatest I can give my kids which is why it has been a central issue for our family.