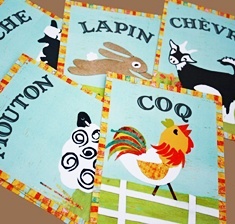 I have recently been thinking about how long I can carry on talking to my children in a language that is not my mother tongue. There are many, many occasions when it is difficult and I’m sure I lose my cool with the kids more often because of the constant pressure I put on myself to stick to French, even when it would be a hundred times easier to think what to say in English. Because of this, and also because as my children are growing up, their language is getting more challenging. I am reaching a point where I need to switch to English some of the time. It may be to try and explain something complex (usually scientific) that my six-year-old daughter has asked me, something I would struggle to find the words for even in English, or it may be to let my three-year-old son know why his behaviour is inappropriate without resorting to shouting. What’s difficult is that I sometimes forget to switch, because the habit of talking in French is so ingrained, especially when my daughter begins the conversation in French.

Although I studied French for around 15 years, including a B.A. and an M.A., my daughter, at 6, has already outstripped my French. Of course I know many more ‘grown-up’ words, but in terms of holding a natural conversation, she has completely overtaken me. She has a near-native accent and intonation, prefers to write in French, and can switch between the minority language (ml) and majority language (ML) effortlessly. I, on the other hand, have a clear English accent and struggle to put my French hat on after a day of English. So I’m finding that it works better these days to talk mainly in English with Schmoo. With Pan-Pan, though, things are different. I feel he still needs extra French input at home, because unlike Schmoo at the same age, he is showing a strong dominance for English. His passive understanding of French is 100% and he will generally switch to French if asked, but begins nearly all his conversations in English. He doesn’t have that emotional attachment to the language that Schmoo seems to have, probably because there was already more English at home due to his sister when he came along. So I try to speak mainly French with him and also ask Schmoo to speak mainly French with him – it’s no longer straightforward OPOL (One Person, One Language) for us.

Because we are so lucky to have the French immersion school, I am not too worried about ‘fading out’ to English at home as they get a little older and I expect to be talking solely English at home by the time Pan-Pan is 6. Saying that, I will still always read to them in French (where all the hard work of the vocabulary and correct grammar is done for me), show French films, and bring any other French input to the home that I can (piano lessons in French, playdates with their monolingual French friends, etc).

It is a tricky issue, and I have gone back and forth as to what to do. Giving up talking French with my children has not been an easy choice (there is the emotional attachment to the language, the habit of speaking it, my love of the language, whether it will devalue French for the children, etc etc), but it does seem to make sense for our family at this time.