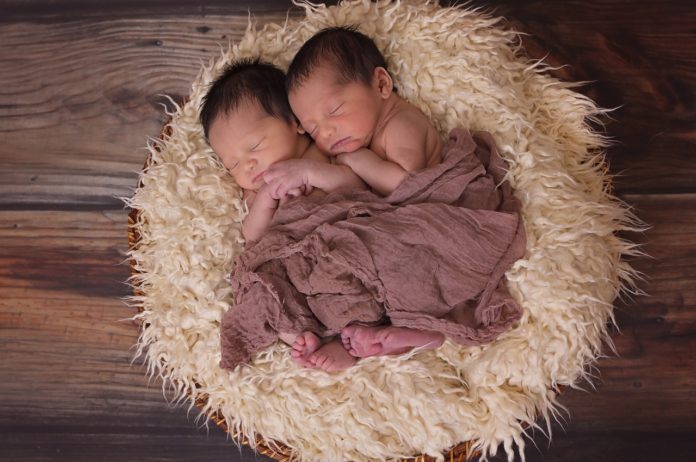 While viewing a new exhibition at the art museum with my twin daughters, who are three and a half years old, we stopped in front of a painting that caught their attention. I asked them, “Que ven en esta obra?” (What do you see in this picture?) Emma jumped and said, “Nieve y Arboles” (snow and trees). Hannah, with a concerned face, answered, “Es buy scary” (it is very scary). That was a funny Spanglish response.

Emma and Hannah have been bilingual since they were born and many times they mix up English and Spanish in one sentence. When they do this, they seem to pick the easiest words from each language. Most of the time, they combine both languages because they do not have the vocabulary they need. Early on in their language development, I worried about their melange of English and Spanish thinking that this could cause a delay in speaking each language fluently. However, after a while, I realized that they could easily incorporate and use new words in each language and they knew perfectly who understood which language, approaching people in English or Spanish accordingly.

When I lived in New York City and was teaching a workshop in a public school, I was shocked to hear a teacher approach a student in Spanish and English in the same paragraph. She mixed both by saying two words in English, two in Spanish, and sometimes she even made up a few words. The students, of course, having her as a model, copied her in their speech. I never believed in this approach as I do not think that it can help students to learn both languages well. These students were constantly lacking words while talking about art in my workshops. Both of their languages combined would make barely one. After many years of teaching and later on, as a mother raising my own bilingual kids, I realized the importance of reinforcing one language at a time. When my twins speak with me, I do not encourage them to mix the two languages, so I gently correct and replace the words. This way, they learn to express themselves fluently in Spanish, enriching their vocabulary. My husband, who is American and speaks only English with them, has the same approach.

When my twins first started speaking, their vocabulary was not as rich as that of other children. Specialists would ask me how many words they were saying at different ages and my daughters’ vocabularies comprised fewer words than the statistics suggested. Talking with child development specialists and friends in similar situations, I came to the conclusion that it was totally normal that they were not expressing themselves as effectively as other children the same age because they were embarking on the challenging journey of becoming bilingual.

When Emma and Hannah were almost two, they had a list of words that they would say and if asked, they could translate them quickly. It was a fun game for both them and relatives and friends in Argentina and in the United States. I would ask in Spanish, “Mama says ‘case.’ How does Dad say it?” They would reply with a big smile, “House!” They felt very proud of themselves when they knew all those words in Mama’s and Papa’s languages. At that stage, they were aware of the two languages spoken at home and outside the home. However, we did not call them Spanish and English as we thought that it would be too abstract for them. We called them “Mama says, Papa says.” They understood that two ways of talking were going on at home and very quickly they also understood that other people too would speak one or the other language or both. They knew that there was not a ‘secret’ language being spoken at home, like many adults told me about their childhood experience growing up speaking only Spanish at home. The famous “Twin Language” also did not develop between Emma and Hannah, probably because they already had two languages and may not have needed a third one.

Most often, they speak English with each other because they use English in preschool and with most of their friends outside school as well. However, I hear a lot of Spanish at different moments, especially when I intervene and play or suggest ideas to them. When talking with both parents at the same time, Emma and Hannah switch naturally from Spanish to English and vice versa. They make a comment to their Dad and as if I did not understand their comment, they then translate it for me. It is very interesting to observe this process and their word choices when they do not have the vocabulary they need. When I moved to the United States from Argentina, I went through a similar process. My vocabulary was limited, so I also had to find ways to express myself using many other words to replace the ones that I did not know. For an adult, this process is often frustrating but for my children, they move between the languages in a relaxed way, free of any frustration.

My advice for parents raising bilingual children would be to expose them to both languages all the time: at home, in school, with friends and in some extracurricular activities such as dance, art, and music. Hands-on activities are one of the best ways to enrich their vocabulary. If the children live in the United States, we should try to take them to activities that are taught in the other language spoken at home, so they can learn, play and create in this other language as well as in English. At our house, we have a large collection of books in Spanish and English. I read to them in both languages and they love it as well. When they watch movies, I play them in English because I dislike the translations. However, when I watch with them, we make comments in Spanish. In their preschool, they do circle time and sing in both languages. It is fun to hear them singing in Spanish because I can hear an American accent. Sometimes, they are interested in translating their songs when they learned them in only one language. Because music is a huge part of their lives, we have many CDs in both languages. They love dancing and as they dance they recognize and repeat some words from different songs.

It has been an incredible adventure raising my daughters bilingual and there are still lots of fun experiences to come. I am excited about teaching them a third language like French or Italian when they get a little older as languages open up the horizon in ways that surprise you. My daughters already took advantage of knowing two languages. In three and a half years, their vocabulary has increased enormously and they say sentences in each language. Although sometimes it creates a little anxiety for me that they use both Spanish and English in one sentence, I know that in the long run they will speak both languages fluently.