Not everyone has the same reasons for raising bilingual children. For some, it is necessity: a language particular to the country you’re in, your family language, your parent’s language. For my family, our kids learning Arabic is a necessity. Arabic is their father’s native tongue and the language half their relatives speak. Not teaching them would be unthinkable.
For others, bilingualism, while not a necessity, provides advantages and opportunities. In Berkeley, California, I’ve met many monolingual parents who don’t have a necessity for their children to be bilingual but a desire, as they recognize the benefits of bilingualism. The schools in the Berkeley area reflect this, as well as the diversity of the population–there are Spanish, Chinese, Japanese, Persian, French and German immersion schools, and probably others I am forgetting. My family also fits into this category when it comes to our kids learning a proposed third language. Although I love Spanish, and it’s the most practical second language in the U.S., we gravitate towards French for their third language. French was the language my husband and I originally communicated in when we met, we both speak it so could easily facilitate the kids learning it, whereas only I speak Spanish. French is also the second language in Morocco and my kids are half Moroccan.

My kids are also picking up some Tibetan from their daycare providers. We have encouraged the teachers to speak only Tibetan to them and they responded with utter surprise as I don’t think many of the other parents have expressed this desire. We see any language learned as beneficial, even more obscure ones. All languages open doors and present unseen opportunities, not just the widely spoken ones. When my kids reach an age to express their opinions beyond food, toys and clothing choices and tell me they are passionate about learning Quechua or Tibetan, and not French as we chose for them, I would encourage them wholeheartedly.

Take a look at this chart below on the top economies in 2015 and the predictions for 2050. Does this influence at all what languages you will encourage your kids to learn? What influences your decision on their language acquisition? Leave a comment and let me know–I’d love to hear from you.

Top Economies of the Future Based on Projected Gross Domestic Product 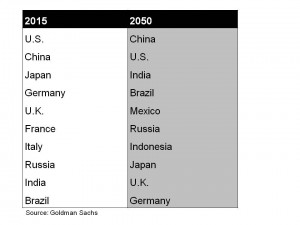