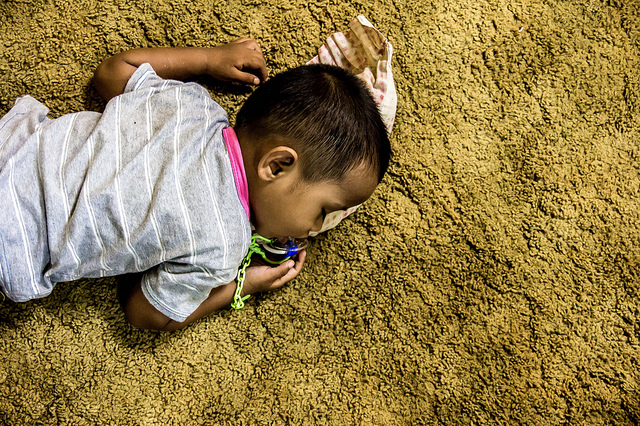 From the time my kids have been home, they have demonstrated some strange ideas on sleeping. On Friday nights, we let them have more freedom to sleep all together, or in playrooms or around the house. (Usually they sleep two to a room.) One time my girls came downstairs while I was cleaning the kitchen on a Friday night really excited. They were in their pajamas, with pillows, blankets, toys in hand. “Mommy we have a great idea! We want to sleep in the kitchen.” Although I give them a lot of leeway on the weekends, the kitchen was off limits.

Some orphans have slept on the streets prior to being adopted. Mine had sometimes slept in haystacks near the animals. Some slept in small houses with one room where 25 people would sleep. At the orphanages they would be in these bunks three high with 40 to 60 kids in one room. As a Westernized society we can pile our judgment onto them and think, “Poor kids. I bet they would really like their own rooms with all of their own stuff. They have nothing!” We forget that many of the kids LOVE to sleep in odd places. It makes them feel safe under the bed or snuggled up next to each other. Two of my kids don’t like the fitted sheet so pull it off to sleep on the bare mattress. All of them can be found from time to time with blankets over their heads, sleeping cocooned inside their little safe havens.

Although, I think it’s important to teach kids about boundaries and rules, when we adopt, we have to be really careful to pick our battles. I remember seeing a TV episode of a couple who never had any kids but then adopted three from Russia. They ended up reversing the adoption because at bedtime they would have these brutal battles to get the kids into bed. In one scene, the kids were hiding under the beds because they wanted to sleep there. The parents were incensed and physically fighting with a screaming child to lay in a twin bed. By disrupting the adoption and sending the children back because of their rigid belief, that family damaged the children they adopted by making their fears come true in rejecting them.

In the morning, I often never know how I’ll find my kids. This particular morning made me laugh as there are four kids in one room. Here are the pictures.

Matea and Ella are both on the floor on a makeshift mattress.

Jared had all the bedding pulled off of the twin bed, with only his super hero sleeping bag. I have also found him sleeping with his feet on the floor and head in the seat of a cushy chair.

Here’s a room shot…it looks awful but just how they like it.

Grace is in there somewhere too but she kept the sheet on. I have found her sleeping in chairs before.

My attitude is that as long as they get enough sleep and aren’t cranky during the day for school, they can sleep in the same room sometimes. That night was one of them.