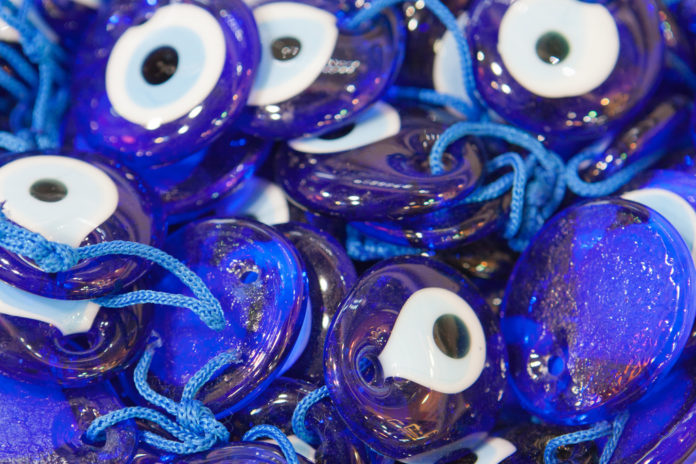 • No whistling especially at night or evil spirits will come.
• No cutting your nails at night. This will shorten your life.
• Never hand a knife directly to someone–always set it down for them to pick up or it can cause turmoil and fights between you and that person.
• Do not step over anyone or that person will remain short.
• Never eat food out of the pot or it will rain on your wedding day. This one I believe because I used to eat out of the pot all the time, and it did rain on my wedding day in June in California. Go figure. My mom turned to me and said, “I warned you about that, didn’t I?”

Out of all the superstitions and rituals, the one that has stuck with me most is the belief in the evil eye. The evil eye is a sharp glance or a negative thought presumed to have the ability to harm those on whom it falls. I remember as far back as age three, my mother would adorn me with an evil eye pin, necklace, or bracelet, especially when I would be with other Armenians at family functions or school events. When I asked my mother about the evil eye, she responded that it was a good luck charm. I was content with her answer for a while.

At an Armenian function one day, my mother had forgotten my evil eye. Throughout the day whenever someone would compliment me on how cute or articulate I was, my mother would quickly but extremely discreetly scratch my behind. After the third occurrence, I asked her why she kept doing that. She sternly shooshed me, as most Armenian mothers do and said that she would explain later.

On the way home, she talked to me about the details of the evil eye, in seven-year-old terms. She explained that even people who love and adore me could accidentally cast the evil eye on me as excessive love, devotion and admiration can provoke it at any time. Zealous admiration, envy, or even malicious jealousy, also trigger the evil eye. Because of this, there are numerous practices used to counteract the risk of accidentally eliciting the eye.

Diverse traditions around the World

These practices vary across cultures as the belief of the evil eye has no cultural or religious boundaries–it coexists in almost every religion from Christianity to Islam and is mentioned in the Old Testament and Jewish folklore alike. Awareness of the evil eye is strongest in the Middle East, East and West Africa, South and Central Asia, and the Mediterranean region of Europe. It has also spread to other areas, including northern Europe, particularly the Celtic regions, and the Americas, where it was brought by European colonists and Middle Eastern immigrants. In Latin culture when a child or object is admired, a preventive measure is to allow the admirer to touch the child or item being admired as a way to dispel the envy. The Greeks have a ritual of spitting or rather making a vocalized noise reminiscent of spitting as a symbol of hydrating, as in ancient times, the evil eye was suspected to be related to desiccation, withering and dehydration. For my mother and many Armenians, scratching my behind was her way to defuse the risk of my being a victim of the evil eye.

Some popular traditions around the globe:

One of the many unspoken rules of Eastern Mediterranean people is the caution taken when praising or admiring anything, especially children. I was taught whenever I needed to praise or compliment something or someone, I should use the term “Mashallah” to invoke God’s blessing and ward off the evil eye. As I got older, these rituals became second nature to me. When I brought children into the world and wanted to do whatever I could do to protect them, these rituals became even more integrated into my life.

Overtime these rituals turned into my fascination. My fascination became an obsession and my obsession evolved into my business venture. I now design evil eye jewelry for women, children, and infants. The evil eye, as I understand it, should be viewed as a guardian angel. The guardian eye watches over you, your loved ones, your home, your possessions, and anything that you hold sacred. The glass guardian eye is opulent and reflective. It is like a magnetic mirror that draws positive energy and deflects negative energy or intentions. If the energy is too strong for the glass eye to deter, it breaks and sacrifices itself to protect its bearer.

I know that to some, the evil eye is just a superstition but to the true believers, its power is not to be taken lightly.