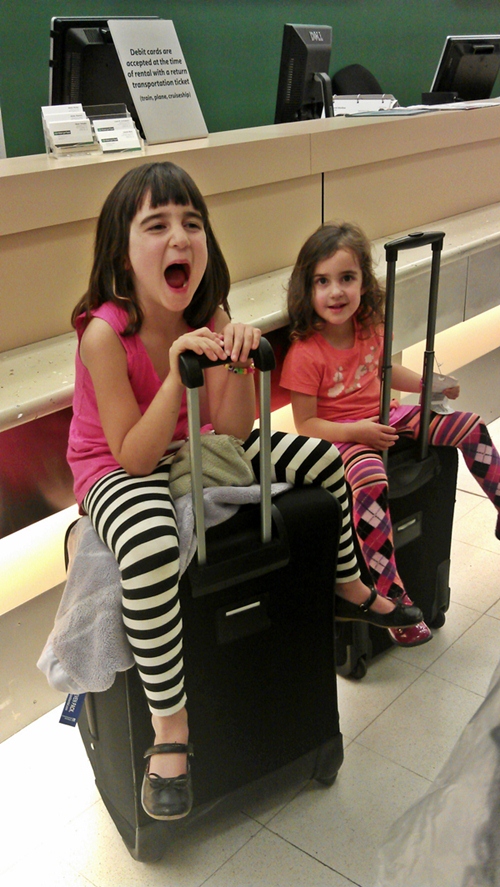 It’s been over a year since we took any trips on an airplane. I forgot how much I enjoy the hustle and bustle of airports, even with kids, as I love their excitement over the little things: Planes! Escalators! The scale at check in!

I often hear about parents who gave up their jet-setting lifestyle when kids came along because travel was too much work. While traveling with kids definitely involves more preparation and requires more stuff, it doesn’t have to be a burden. I try to limit the amount of stuff needed to the basics (for example babies, especially ones who are not crawling, don’t need cribs—they are just fine with some blankets folded on the floor). I also adjust my expectations. Because I know we will need more time for everything, we get to the airport plenty early (which involves telling my husband the flight will leave about 45 minutes to one hour before it does) to allow the kids their own time to dawdle, take it slow and get lost in the things that interest them as well. We also don’t take a stroller with us usually, something that surprises many other parents. But seriously, we have never needed one because this is how we roll: 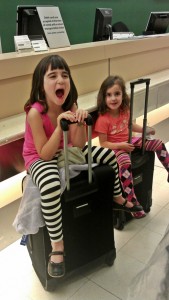 If your child is two or younger, then a carrier is invaluable–the ergo was our favorite from ages six months to three.
As with every trip, I set out for Michael’s (or any craft or dollar store will do) and pick up about 10 of the cheap, no more than a dollar or two items to entertain my kids on the plane. This last trip was nearly four hours on the first plane and two hours on the second, so a bit long, but luckily not as long as flying to Morocco. We would also be without electronics of any type as our portable DVD player was broken. I always hide the new toys until we get on the plane; depending on how antsy they are during takeoff (this usually happens on the second plane once the novelty of flying has worn off), I start talking to them about what fun presents are in the bag. Nothing like the promise of a present to encourage sitting still.

This time our craft/toy bag included: scotch tape (you would be amazed at how long this can amuse kids—our kids taped up their tray tables for what felt like ages but was probably 20 minutes, which is an eternity in airplane time), scissors, beads and string for bracelets, play doh, Hello Kitty activity coloring books, mini dry-erase sketch pads, stamps, stickers, alphabet flash cards, preschool question and answer flash cards (my kids like cards), and pre-cut turkey crafts that kids just have to assemble with glue. I also always throw a few books, blank paper and crayons/markers into the bag. I only bring stuff that won’t matter if it gets lost under the seat, because it inevitably does.

I also have a bag within a bag with a variety of non-sugary, non-junky snacks. I don’t want them too sugared up and restless from sitting down for so long. Previously, I made the mistake when traveling of buying all sorts of novelty snacks they don’t usually eat but love (like cheddar bunnies, animal crackers, etc.). However, now I make sure the novelty items are games and toys and the foods are an assortment of their healthy favorites (e.g., pancakes, hummus sandwiches, pomegranate seeds, plantain chips, raisins). Tip: never underestimate the amount of snacks you will need. My kids usually always finish everything and there’s inevitably something they usually like but won’t touch. On average, each toy enjoys about 20 minutes of attention span, alternated with snacks, trips to the bathroom and other games we come up with—lately my girls’ like playing hairdresser—and we made it through two flights.

On all four flights, both to and from Florida, we were complimented by all the people sitting around us on what great travelers the kids were (relief as it wasn’t always this way; I recall the grumpy boyfriend and girlfriend who glared at us for hours on a Frankfurt-San Francisco flight as my kids were so restless; or the two-hour long screaming, flailing, out-of-control tantrum one of my kids had on a flight to Santa Fe because she refused to sit during takeoff or at any other point). Truth be told, while their good behavior had something to do with the energy that went into keeping them entertained on the flight, it mostly involved their not being two anymore and the bribes offered. After flight number one, they were awarded lollipops for good behavior. When they started pushing each other in their seats or annoying one another, this worked charmingly to settle them down and keep their hands to themselves. And then they were promised an ice cream at some point during the weekend for good behavior on the second plane.

What are your tricks for good plane behavior?