Almost 10 years ago when we first moved to the UK, I had to adapt culturally. I had lived in Southern France for the last six years and I immediately felt at home in Northern England because I grew up in Northern Germany, and as we all know, Germans and British are close cousins.

Or so I thought.

I ended up in a lot of situations where the English behaved in ways foreign to me. I originally put it down to my time in France: I must have adapted more than I thought! But it turns out that the British have their very own ways and are not like Germans after all.

One thing that constantly puzzled me was how docile Brits were.

Here’s the scene: a local, reasonably big supermarket. My colleagues and I used to drive there at lunch time to get triangular sandwiches which we would later eat whilst reading emails. They had a ton of checkouts plus six relatively newly installed “self-checkouts” where you just scan your stuff yourself.

Those self-checkouts were placed in a slightly awkward way and it was sometimes tricky to spot the queue of people waiting for them, which meant a lot of people just accidentally skipped the queue completely. 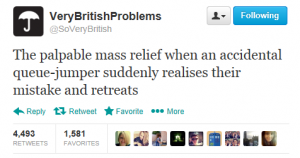 I watched in amazement as the British in the queue around me ignored that, or maybe shook their heads or expressed their disapproval in that lovely British way: tutting. 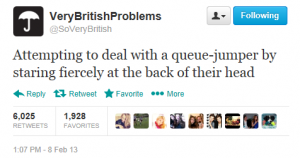 After the third time or so I couldn’t stand it any longer so I politely told people “Excuse me? There’s a queue over here,” which usually worked.

My perception at the time was that the people who jumped the queue (accidentally) took advantage of the calm nature of those who were queuing. This is where my time in France really made a difference. Having lived there, I am sick and tired of people taking advantage of others. 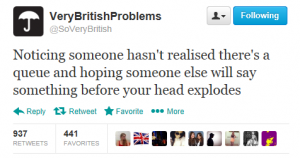 So I listened to my deep-seated need for fairness and helped the British by doing something that came easy to me.

Funny enough, my English colleagues looked like they wanted to shrink into the ground.

It took me months to figure out that I was being rude (I am German, after all), and that the tutting was actually a very strong display of disapproval.

The Brits weren’t docile, they were just not making a scene! 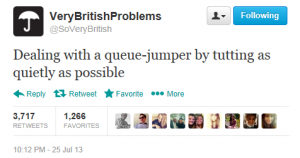 Not in France, though!

More than nine years later, I have finally come around. I know that very few people jump the queue on purpose, so these days I shrug it off. And if someone does take advantage of me or others on purpose, I now chime in and let out a really annoyed tut.

Life can be as relaxed as you want it to be, I guess.

Then again, this only applies in the UK. As soon as I’m in France, my defences go back up immediately, and I react to situations the way I used to. I could now cite “intercultural competence” and fluff it up, but I think I’m simply generalising and being unfair to the French.

It’s funny how knowing about cultural differences is one thing but living through them is totally another.