Before my daughter was walking, I rarely put shoes or socks on her tiny feet. We live in Guatemala, where the temperature never drops below 60 nor rises above 80. I used to throw her in the stroller or plop her in the swings, barefoot. When we did errands around town, her bare feet would hang out on either side of the ergo. As a new mom, trying to get a small person and myself ready most mornings, baby shoes and socks were a nuisance more than anything else. 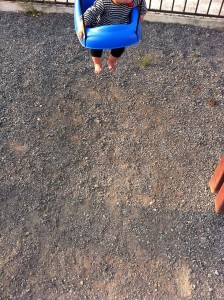 Until one day when a Guatemalan woman with dark hair and kind eyes and a baby tightly wrapped around her back, stopped me in the central square with a look of shock, “Anda descalza!”

“She’s barefoot?” It was more of a question, than a statement, as she gently held out my daughter’s foot for me to see, that yes in fact my daughter did not have socks or shoes on.

It was as if she couldn’t comprehend how a seemingly well-dressed, foreign mother could let her daughter be out in public descalza, barefoot. I had broken a cultural norm I didn’t even know existed.

Having shoes was a status symbol that I had failed to recognize, because I have always had a closet full of shoes and I imagine my daughter will as well. When you have the privilege of choice, the converse is also true, you have the power not to choose something. But I had never considered what it feels like to have absolutely no choice at all. And the truth is, I may never really know what it feels like, but my husband does.

He didn’t have a lot of choices growing up. He didn’t get to choose what shoes to wear in the morning. In fact, he had just one pair of shoes; a black leather pair of loafers that his parents saved up for and bought him and his sibling each year on Christmas Eve. They were a gift that was expected to last the whole school year. Each afternoon when my husband walked through the cornstalk doorway afterschool, his mother made take off his shoes.

“Quítate los zapatos, mijo. You’re going to get them dirty.”

He then spent the afternoon walking around their dirt floor, barefoot.  The bottoms of his feet were never clean. It was not a choice, but rather a source of shame. He didn’t own another pair of shoes. No slippers, no sandals, just the soles of his feet and the black shoes that had to last him for the whole school year.

I have often heard poverty described as a lack of meaningful choices. When the World Bank asked 60,000 people living in poverty to describe, “What is poverty to you?” 90% of the time they described an emotional or physiological feeling, not a lack of material things. What people mentioned was lacking dignity and not having enough opportunities.  This is not to discount the very real physical needs of the poor, but it is to say that maybe, closely intertwined with these physical needs, is the ability to make meaningful choices. Because we all know that having the ability to choose is empowering.

My husband I and have talked a lot about the power of choice. It’s why the rich shop at a thrift store and are proud to announce their frugality and resourcefulness. Oh, yeah this sweater? I just got it at the Salvation Army. But they had a choice. Most likely, they could have gone to the closest department store and purchased a brand new sweater, but they chose to save a few bucks. The poor may shop at the same thrift store, but they are usually never as proud to announce where they got their sweater. Why? Because they didn’t choose to shop there. The poor often don’t have the luxury of another choice.

In Guatemala we have a section behind the market that locals affectionately call, “The Paca,” where vendors sell tables and tables of second hand clothes that have been bundled up and shipped down to Guatemala from the U.S.  I love scouring through the piles and have found quite a few cute shirts for me and some dresses and a jacket or two for our little girl. One afternoon we went to visit my husband’s parents at the home where he grew up. The same home where he and his siblings had to take off their shoes when they came through the doorway. Now there is tile on the floor and a secure metal door, but many of the scars of growing up in generational poverty are still there.

As my mother-in-law bounces my daughter on her knees, she oohs and aahs about how cute her back and white checkered dress is.

“Where did you get it?” She asks me curiously in Spanish.

Before I can respond, my husband looks at me and in perfect English, so she wouldn’t understand says, “Tell her you bought it in the states.”

In the car on the way home, my husband explains. “She wouldn’t understand why we would buy Elena’s clothes at the Paca. Growing up she bought our clothes there because we didn’t have another choice. It was all we could afford.”

If poverty is defined as the lack of meaningful choices, I often wonder if wealth could be defined as having too many choices? In the United States, hailed the land of opportunity, is it possible that we have too many options?  Most people can agree that having more options doesn’t necessarily seem to make us more content and happy as a nation. In fact psychologists have pointed out that having more than three choices actually leads to increased stress and diminished returns on buyer satisfaction.

If the poor are often defined as suffering from have too little, I wonder if many of us are drowning from having too much?

That morning in the central square, as the Guatemalan mother held my daughter’s foot in her hand, I realized there is nothing that I could say to make her understand why my little girl is barefoot. Here I was making a choice to let my daughter go barefoot, when there was a drawer full of shoes and socks back at home. And yet here was a mother, with her baby on her back, who very well may grow up with just one pair of shoes for the entire year.

The woman leaned over and kissed the soft white skin on the top of my daughter’s foot, and I smiled at the dark haired little baby on her back. His deep brown eyes staring back at me. I thought of my husband. That could have been him. But he wouldn’t want me to have pity, no the poor don’t need our pity. Pity is what privileged people feel when they are uncomfortable. When I see a little kid like that, I have hope.