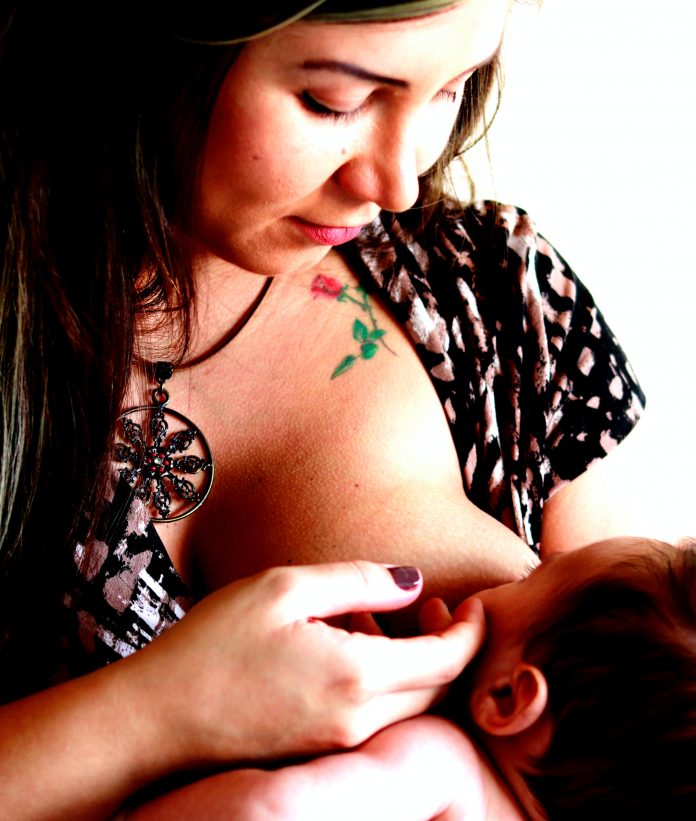 I’ve done a lot in my day to support the breastfeeding cause: calling moms at work to schedule feedings, carefully titrating breastmilk into bottles from plastic bags without spilling a drop, feeding with a spoon when a bottle was refused. I’ve even ignored what was probably a sign of postpartum depression: a woman clad almost exclusively in an open, pink terry cloth bathrobe, in the interest of encouraging breastfeeding. Only in retrospect, I realized that most women managed to breastfeed and be fully clothed at the same time.

At first I felt I had little to add to the conversation. After all, I have yet to put a baby to my own breast and even as an adamant sideline supporter, what else is there to say? Other than, “If you can—do!” The right philosophy on breastfeeding seems clear.

Granted, this is being said by someone who was breastfed up until the age of two and a half whereupon my mother traded me a trip to Disneyland in exchange for weaning. Having now worked with toddlers, I’m impressed that she was breastfeeding a child with a full set of teeth who could negotiate and string together long sentences. I’m also sad that I wasn’t smart enough to make the better choice on Disneyland, as I could possibly still be breastfeeding today. Regardless of my extreme bias, the data backs me up. Medical studies and sociological surveys both maintain it’s the superior choice. The rest of the world is leaps and bounds ahead of us–they never gave it up in the first place. So on one level, breastfeeding seems the easy choice that should hardly sustain the breastfeeding debate, which manages to somehow remain radical over the years.

Reading the comments that followed this site’s articles on breastfeeding, I was struck by the overall defensive tone, both from those who breastfed and from those who felt chastised for not doing so. Everyone feels attacked. Everyone feels so judged and put upon. The breastfeeding contingent complains that they are gawked at in public, disrespected in the workplace and considered freakish by their peers. The other half grumbles about the superior attitude breastfeeders maintain, and truth be told they aren’t delusional. The breastfeeders do feel superior. Now I will grant that on some level, they have the right. After all, if you can–do! But how do we know the circumstances by which women came to their decision?

I imagine myself one day as a foster parent in the park, giving my baby a bottle, because as much as I support breastfeeding, I won’t have a choice in that scenario. If I was getting dirty looks from the righteous mom brigade, I might get defensive too. But the truth is that the defensive reaction from both sides is caused not by other mothers but by a society that doesn’t equip women with the skills to succeed.

Perhaps if we were better at supporting each other, more breastfeeding would be the result. In more communal societies, the practice of breastfeeding is hardly lonely; it is encouraged by strangers and family alike. In America, it is a more isolating experience. Behind screens and closed doors, women feed their babies furtively. We leave the room. At work, we express milk without even our babies as company, solitary other than machinery. When problems arise, we look to books and the Internet for advice, maybe hire a lactation consultant. If that doesn’t work out, we blame ourselves and give up. The average American mother has no one to turn to for breastfeeding advice–it is quite likely that her own mother knows no more than she does. We don’t know how to do it right because we have stepped out of tradition. Without the inter-generational structure of familial support, how are we supposed to know what we are doing?
We don’t generally expect our older children to be involved in caring for babies, but it means they lose out on chances for the conference of technique and traditions. I learned much of my knowledge about infants and parenting as a 10-year-old caring for a decade-younger sibling. Our culture doesn’t teach breastfeeding yet judges women when they fail for a variety of reasons–we expect it to be instinctual and often give up when it is not.

The worst part is the more we stress about it, the more likely things don’t work out. The let-down reflex, the process by which milk flows out of the alveoli and into the nipple in response to a trigger, such as the sight, sound or smell of the baby is a finicky thing. Stress and anxiety can inhibit the release of milk–so while the body can be producing milk, none may be coming out. Physiological challenges like positioning can be more easily sorted out, but the self-fulfilling prophecy of milk insufficiency is a doozy.
In addition, many of our cultural practices make the interchange between infant instinct and maternal milk production less fluid. The separation of baby and mother in hospitals interrupts the natural bonding process. Feeding on a schedule can negatively affect milk production and ideal milk composition favors frequent feedings. The first milk to come out of the breast—foremilk—is left over from the last feed and as its fat has been reabsorbed back into the body; it is not ideal for infant sustenance. It then takes a while for the fat, richer hindmilk to appear, so interval feeding can interfere with infant satisfaction. As Meredith Small says, “It’s not that she doesn’t have enough milk; it’s that she simply waited too long and now the milk is of low quality and the baby knows it.”

Our cultural patterning stands between us and breastfeeding success. In other cultures, encouragement is in abundance and life is set up in a way that facilitates feeding on demand. No such luck in America. We need to be aware of what actually keeps many of our fellow females from successfully breastfeeding and work on sharing knowledge instead of scorn.