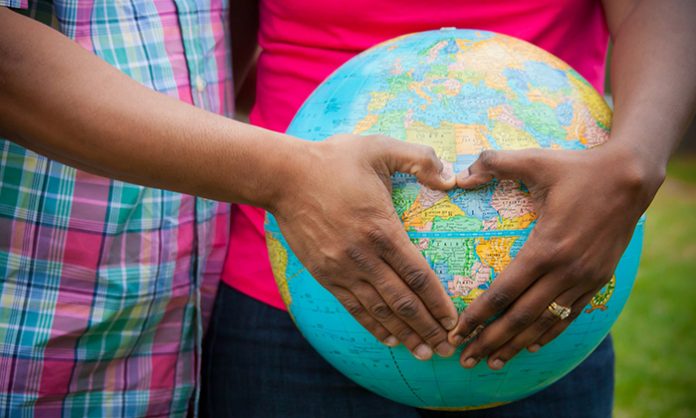 Lately, I’ve been traveling a lot for work. I invariably embark upon each trip thinking I’ll use the countless wasted hours waiting for delayed flights and shuttling to and from airports to catch up on emails or prepare for a presentation.
Only I don’t like flying very much. To compensate for my anxiety, I load up on treats—glossy-paged treats filled with celebrities engaged in activities the editors at US Weekly, People or InTouch would have me believe resemble the reality of my own day-to-day life. As I peruse the Jolie-Pitts frolicking on the Galapagos Islands and photographic evidence that “just like me” Sandra Bullock shops at Whole Foods, I notice there is one adjective we share between us—and I don’t mean the  predictable “beautiful,” “slimmed-down,” “fuller-figured” or “newly single,” either. The adjective is “adopted.”
The first few times I saw a photo caption about Sandra Bullock’s adopted son, I didn’t think much of it. The child is her son, and he is, in fact, adopted. Then I noticed a similar reference to Katherine Heigl’s daughter, followed by Tom Cruise’s and Nicole Kidman’s daughter. Adopted son. Adopted daughter. Adopted son from Vietnam.  Domestically adopted son. Daughter adopted from Korea. Adopted. Adopted. Adopted. Why the need for this adjective? Do editors really think readers will see a picture of Sandra Bullock with her African-American son and wonder, “How can Sandra Bullock have an African-American child? I’m so confused!” So they insert the caption with the adoption descriptor to curb reader confusion. “Oh, he’s adopted. Now I understand.“
I am not unilaterally opposed to the adopted descriptor. As an adoptive mother, I know that being adopted is an essential component of my child’s identity. But with only room enough for a pithy caption beneath the photos, these magazines hardly seem concerned with accurately capturing the essence of a person’s identity.
Of course, there are times when describing a child as adopted—versus biological—is appropriate. For instance, when I talk about my son’s birthplace, the differences in our hair or my absence of a pregnancy, it is relevant to share that he is adopted. It’s the use of “adopted” as a completely unrelated descriptor that I find so irksome.  I react similarly when I hear men discussing a new boss or senior-level executive and make an irrelevant reference to the person’s gender. “I have this new boss; she’s a woman.” What does gender have to do with her position as your boss? Likely nothing. That’s how I feel about the overuse of “adopted.”
I’m mostly tired of this adjective because it has multiple interpretations that can often lead to judgments about both adoptive parents and adopted children. Some people wrongly interpret “adopted” to mean different. Others romanticize the term to mean “extra-special.” My son is adopted and while that does make him different from some of his friends, it also makes him the same as some of his friends.  Yes, he’s adopted and he’s extra-special, but not extra-special because he’s adopted. He’s exceptional because he’s a comedian, an aspiring cook, an architect, a singer and a popsicle connoisseur.
I know gossip magazines are unlikely allies in the fight to demystify adoption, but I wish they could limit their use of this one overused adjective. Maybe then they could use the saved space to add an extra photo of Ryan Gosling!