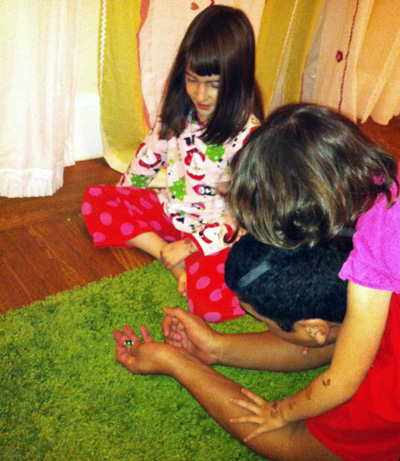 Lately, my kids have had a lot of questions about language—why they have to take Spanish, why do we speak other languages. My four-year-old has also hit the typically four-year-old stage of really resisting my changing languages with her from English to Spanish. It makes her really angry and she will command me to “Speak English!” If a book happens to have a Spanish word in it, she will cover the page with her hand and tell me not to talk like that. It’s pretty typical of four year olds from everything I have read.

Sometimes they ask some pretty funny questions about language, like this conversation they had with their Dad last night.

Lila: Baba, how do you speak Arabic? Did you have a teacher who came everyday to teach you?

Moe (in Arabic): Because I grew up in Morocco.

Lila: So you went to Morocco on a trip and learned it?

Moe: (in Arabic) No, I lived in Morocco. My parents spoke to me in Arabic.

Lila: With a teacher?

Moe: (in Arabic) No, they only talked to me in Arabic. Like I talk to you in Arabic.

What was funny to me was they made a clear connection between having a teacher and learning a language, like they do with Spanish. But they made no connection with their father speaking to them only in Arabic and their ability to understand Arabic. Since Arabic is something that has always been a given in our house, they don’t think about in the same way that they do Spanish. Spanish is something they learn with a teacher, so they assume all languages are learned with a teacher. Somehow, their learning Arabic didn’t fall into that same category, probably because it has been a more natural process.

The next day, my four-year-old still seemed to be tossing all this language stuff around in her head.

“Did you speak Arabic as a little girl too, Mama?” Clearly, they are trying to make sense of language, where it comes from and its differences.