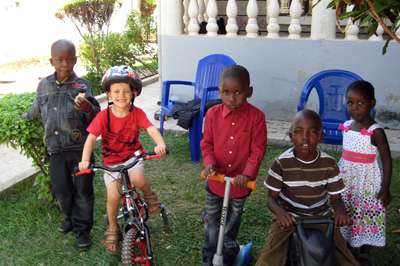 Three years ago, my husband and I moved to Western Kenya to work at an anti-poverty research organization. We did it with a spirit of do-gooder idealism, a sense of adventure, and a toddler in tow. A lot of people who move to a culture vastly different from their own do so in their youth. We shook up our foundations at exactly the time our friends and neighbors were buying houses, saving for retirement and joining their local PTAs.

But we were glad to do it.  We felt it would be not only be good for us, but for our child.  We told people it would be an enriching experience for the little guy—he’d grow up globally minded, more aware of his relative wealth, more tolerant of difference.  But, the truth is we also fretted about all we were giving up.

We traded access to great medical care for new exotic sounding diseases. We traded easy walks to a half dozen playgrounds for long walks in search of playmates. Instead of close proximity to grandparents, our son faced being a constant object of curiosity for strangers.  As much as we extolled the virtues of our son’s emerging global citizenship, we still thought parenting would be a greater challenge for us in Kenya.  I now, after three years and another baby, realize the exact opposite is true.

(1)    You get help.  This is usually #1 on any American expat’s list. In Boston, we spent over one-third of our income on childcare and after rent, groceries and toothpaste there was almost nothing left. When baby #2 comes along requiring childcare, some women do the math and just decide to stay home instead of turning over their entire paycheck to daycare workers. The expense of childcare adds an extra layer of pressure to a decision (to work or stay home) many modern parents already feel ambivalent about.

In Kenya, none of this is an issue.  Here, we can pay nearly double the going rate and spend a tiny fraction of our income on help.  I don’t want to be too gleeful about a situation that results from living in a poor country with high unemployment and low wages. Still, here we can afford to provide a generous salary to someone who needs a job at the same time that we get the kind of help we need in a house with no washing machine or dishwasher and a screaming baby and active preschooler.

Not only is it affordable, but it’s common. Here, even the house help often have house help.  Even those with very little rely on extended family. So, there’s also a culture of multiple hands in the kitchen, and there’s none of the American pressure to be a supermom who can do it all by herself.

(2)    You inherit a massive family. The “it takes a village to raise a child” idiom permeates everything here. I can let my now preschooler wander in and out of our neighbors homes, and my neighbors’ kids do the same.  If food is being served anywhere, all of us can assume our child will be fed. And even virtual strangers become part of your “village.”  One of our first meals out with our newborn, a waiter held the baby, passing him around to other adoring staff the entire dinner, allowing us our first peaceful meal. People I’ve just met will pluck my baby from my arms to admire him and give me a rest. And this sense of community reaches down to even the smallest citizens. Every time my then toddler would take a tumble on the rocky road outside our compound the nearest person over the age of seven would lift him up and wipe the dust off his bottom.  Every. Single. Time. Of course, the flip side of this massive extended family means that I have bunch of pseudo aunts and uncles feeling free to give me unsolicited advice about dressing the baby warmer or nursing him each time he cries. Still, I’ll take the well-meaning, if sometimes intrusive,concern, since it all makes me less alone as a mother.

(3)    You learn to laugh. Kenyans have a way of laughing off some of the things that drive American mothers to joke about drinking wine out of sippy cups.  Especially tantrums.  In the face of an out of proportion, feet stomping, back-arching tantrum over… I don’t know… having a piece of bread cut in two instead of remaining intact, a Kenyan mother will more likely than not laugh.  Because, well, it’s ridiculous.  Americans might focus on how to control, redirect, use it to teach a lesson about not having future tantrums, but they would likely just end up as frustrated as the child. At first I thought the laughter was dismissive and maybe cruel, but I’ve since come to see it as an important stress valve. Through this laughter I’ve learned to look at these passing bouts of emotional hysteria with a little more levity—something all mothers of young children need more of.

(4)    You more easily teach appreciation. Growing up you probably heard, “Finish your dinner! Don’t you know there are starving children in China/Ethiopia/Sudan….?” But to kids, it was probably all been a meaningless abstraction or simply a catch phrase used so often it lost all impact. It’s hard to get our self-focused children to appreciate their relative good fortune.

Here, in Kenya, our wealth is no abstraction.  Our son knows and plays with children whose only toy is a ball held together with string.  We visit homes without indoor plumbing or electricity.  And then we return to our home with light bulbs and running water and TOYS, feeling a visceral sense of good fortune and empathy for others.  My children are still young, so I’m not sure how much of this they are grasping.  Their focus is still playmates and farm animals.  But living here helps them put a face on that child who might be going without a meal or a new toy for his birthday, and hopefully more appreciative of their immense good fortune.

(5)    You “let them play.”  You may think of Africa as a place where children are given chores— fetching water, collecting firewood—early and often out of necessity; a place where children are caned for stepping out of line.  And these things are often true.  But you probably don’t often hear this:  “Just let the child play.”  We hear it all the time. When we are visiting friends, out in public or eating at a restaurant and I yell to my son “Stop running all over the place!!” I will unfailingly be stopped by a friend or even stranger who says, “just let him play.”  I’ve been told, “You can’t control children,” “they are just having fun” and “if the house is messy from children, it’s a happy home.”  This public tolerance for rambunctiousness has made going out and visiting local friends a lot less stressful.  Yes, Kenyans are strict about responsibilities and respect, but kids are also often given a wide berth to play, and now so have I.

(6)    You’re forced to parent with simplicity.  I’ve read all the books too. I get that it’s best for kids to engage in outdoor creative play, to learn to wait, to eat what the family does and to exercise their imagination.  But in the U.S., where there are structured play classes from infancy onward, dinosaur-shaped chicken nuggets and myriad electronic distractions, it’s hard to go back to that simpler time which forced kids to cultivate patience and creativity.

In Kenya all this is easier.  There are no easily accessible playgrounds, so my kids often spend the afternoon throwing different shaped rocks into a puddle, searching for bugs or playing kickball with their neighbors.  My four- year-old happily accompanies me on walks and errands.  There are no child-centered, pre-prepared food options, so we all eat the same food as a family.  It’s all less convenient than life in America but probably worth the bother. In the U.S., I might succumb to the squeezable snack food and electronic toys.  But here I can’t, and it might be for the best.

(7)     You become a “mama.” Here I am “Mama Caleb.”  That’s what neighbors and friends call me, in line with an African naming convention that refers to women in relation to their children. There are dozens of people who don’t even know my name is Kim.  When I first heard of this practice, studying in Kenya when I was in college, I thought it was a sad, subjugating and anti-woman thing to do.  It stripped the woman of her identity and defined her importance only in relation to her progeny.

Then I became a mother.  In the U.S., I felt my status as a mother did not elevate me but instead kept me from engaging fully in the activities, work and the like, that seemed to count most in society’s eyes. So, I love the spotlight thrown on my role as a mom here. Hell, it’s the hardest, most important and most rewarding thing I do, and being called “mama” makes me feel like the rest of the world agrees.