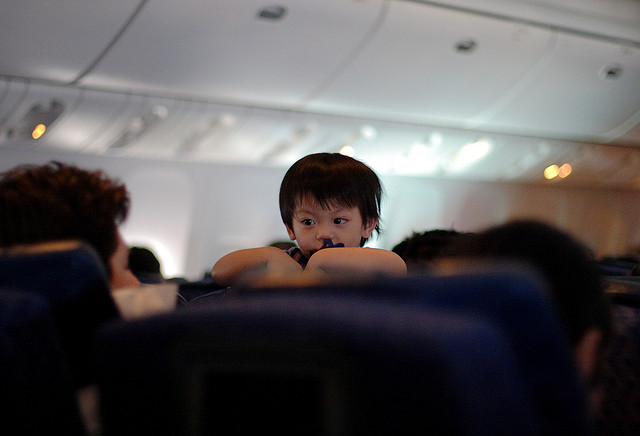 Culturally, my kids are half Canadian. All of their Canadian relatives spend the greater part of the year surviving on Skype and electronic photos to keep up with their speedy growth. So, when our finances and schedules allow, I know that I must plan a return to my home country to give my children contact with the other half of their genetic code. Particularly for my parents (their laolao & laoye), it’s torturous to have such a huge distance between two of their four precious grandchildren. If I didn’t take my kids back to see them, it would be the ultimate anti-filial act, something very important in Chinese culture.

When I tell people here in Beijing that I’m taking my two children back to Canada, the most common response is, “Alone? How can you manage travelling by yourself with two kids?” The truth is, I’ve done it before. Many times. But, frequency doesn’t make it any easier. I usually just nod, but I don’t take their amazement as a compliment. They’re right — it’s hard. I don’t deny it.

This year, as luck would have it, my husband was able to arrange his schedule to travel back to Canada with us. While he couldn’t stay for the whole duration of our visit, having help during the long 13-hour flight, even if it’s just on one leg of the journey, was a source of great relief. There’s nothing like having to take two children with you into the plane bathroom. Or, worse, trying to solo manage the simultaneous feeding of two children from slippery and precarious meal trays.

But, all that is just an afterthought.

Here in China, as I watch my children grow into their distinct personalities more and more every day, inserting Canadian cultural traditions into their world has become increasingly challenging. While my three-year-old daughter speaks to me in English, her Chinese is already more fluent. This is thanks to our childcare providers and my mother-in-law’s consistent presence in their lives. And, despite my many efforts, she and her brother both have what is deemed “Chinese tummies”, as they are simply more accustomed to Chinese food as opposed to Western food. I worry that the older my children become, the more Canada and all things Canadian will seem strange or temporary, or worse, just a travel destination rather than their second home.

My son is only 21 months old, and he’s not yet speaking much in either language. A word here and a word there in both English and Chinese, but there doesn’t seem to be a preference apparent yet. Nevertheless, I see my daughter default to speaking to her brother in Chinese rather than English, even in my presence. I encourage her to speak to him in English, but encouragement doesn’t always yield results. And while it’s not all about language, of course, I know that I have a lot of work cut out for me, the Canadian mommy living in China. I am the sole English speaker in this house.

So, regardless of my husband’s ability to accompany us on a flight home to Canada or not, I have a responsibility to take my kids back to their other home country. Even though my son was born in Canada, cultural traditions are not easily transported to our country of residence: China. Perhaps there are some that I naturally bring to my parenting style or my home décor, but in general, they are growing up in a country that is not the one I grew up in. For them, China is more their home and that’s how it will always be until we decide to move the family to Canada permanently. In other words, there’s only one answer to the question of whether or not I can manage to take them back on my own: yes.

To get through the long flights, I have adopted a new mantra: time passes. Sometimes it takes the form of: “Eventually, we will arrive.” The flight will touch down on the soil of our destination, eventually, and some semblance of order will resume. Until then, one moment at a time. This mantra keeps me more patient and less stressed about it all.

This summer was my third journey with two kids and these haven’t always been unbearable. Sometimes one child sleeps for awhile. Other times, the kids surprise me by being quiet and pensive, easily entertained and well behaved.

Of course, there are also the exhausted moments when they simply want to torture the person sitting in front of us by pulling on their seat continuously or opening and closing the tray tables on constant repeat. There aren’t always understanding flight attendants when my daughter remembers where the service button is located. On our last flight, I had to apologize several times to the not-so-cheery flight attendants and then quietly scold my daughter for not listening to her mommy.

All in all, I think travelling with children, while definitely more of a mission, contradicts the old saying that “life is about the journey, not the destination.” For me, it’s the exact opposite: returning to Canada is 100% about the destination. No matter how troublesome and exhausting, it must be done. The vision of my own parents waiting for us anxiously in the Toronto airport with nearly a year of anticipation stored in their arms, anxious to wrap them around their growing grandchildren, is enough to keep me focused on my mantra.

Besides, once we are there, it’s such an amazing opportunity for the kids to learn more about themselves through their extended overseas family. While witnessing them grow into their identities makes me a very lucky mother, witnessing them have the chance to do some of that growing back in my home country makes me that much luckier. Particularly seeing them play with my two nephews — their only cousins — makes every uncomfortable moment of travelling with two children absolutely worth it.