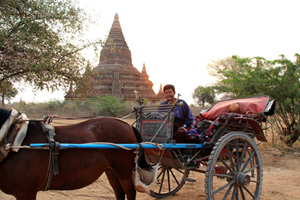 A few weekends ago, we piled into my friends’ van and drove eight hours to Bagan, the ancient capital of the Kingdom of Pagan (9th – 13th C.E.) located in the Mandalay region of Myanmar. At its height there were over 10,000 pagodas in the Bagan plains alone. Today there are only 2200 pagodas still standing.

From Yangon, we drove along the new highway built from Yangon to Mandalay, reportedly the only highway of its nature in Myanmar. We were one of the only cars on the large road with occasional people walking or riding bikes in the wrong direction, children crossing alone and ox carts traveling along the side of the road. You could see that the villagers who live along the highway are still adjusting to the new thoroughfare. I found myself praying that they learn to be safe before too many lives are lost.

Once in Bagan, we checked into our modest hotel in the center of town. We awoke at 5 a.m. the next morning to take an early morning horse and cart ride with Damon to some of the most beautiful pagodas.

We watched the hot air balloons take off over the vast plain of pagodas shimmering in the morning light. Built over 1000 years ago, the pagodas were the work of a succession of kings who believed that constructing temples would bring them great spiritual merit as is common in Buddhism. One particular king became obsessed with building the largest and most beautiful pagodas with perfectly shaped bricks that needed no mortar. The legend goes that if any mason was found constructing a pagoda with mortar, he would have his hand cut off as punishment. Ironically, this greedy and cruel king died before his largest and most ambitious pagoda could be completed. A dharma teaching in and of itself.

Our friends, Damon and Stacy Zumbroegel, own over 30 acres of land in Bagan right on the Irrawaddy River, which descends directly from the Himalayas. They plan to build a retreat center and guesthouse there and in other locations, called Vihara Collective. Vihara is a Sanskrit and Pali term which means “a secluded place in which to walk,” and refers to dwellings or refuges used by wandering monks during the rainy season. Vihara became the name of a place to practice and live in harmony with nature. Stacy and Damon’s vision is to develop multiple viharas where travelers can have an authentic connection to place and practice.

“There are four basic requisites to human life: Shelter, Food, Clothing, and Medicine.

Vihara Collective applies these requisites to a culture in the same manner as an individual human being. When these requisites are present in a universal manner, a culture will thrive, both in its traditional values and its modern development.”

Their mission is a great one. Unfortunately, they have encountered many obstacles in Myanmar over the last few years such as resources being horded by a few powerful developers, permit issues, and so on that make this wonderful vision a great challenge. It will be interesting to see what the future has in store for them. Damon, an architect, has designed many beautiful homes and hotels for the Myanmar elite, but his actual building has been thwarted almost every time. Despite these difficulties, they are both staying open to what is meant to happen.

The kids are having a great time with their old buddies, Satya age six and Amara age three.

We’ve landed in a fun home environment with a pool club down the road, a French bakery and an internet café nearby. It’s been a gift to have this opportunity to experience a beautiful culture as it was and see glimpses of how it will be. It’s a very interesting time to share with our expat friends.

To read more about Chandra’s global homeschool adventure, see her post Around the World in One Semester.