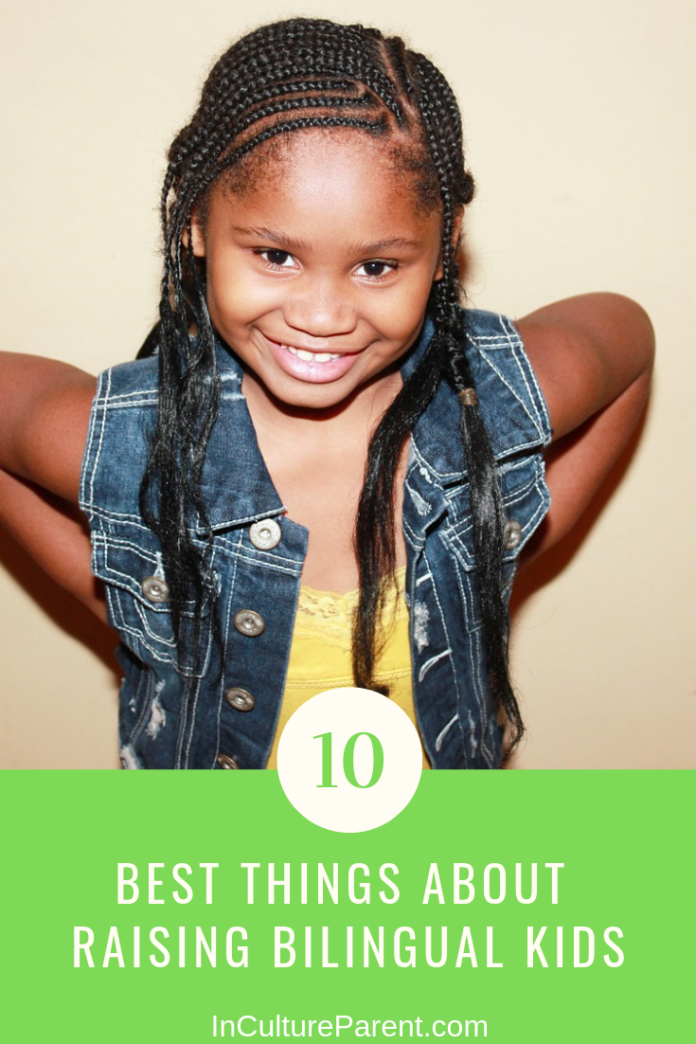 Here are the 10 best things about raising bilingual kids, in our case in French and English:

1. When people ask my kids where they’re from (a pretty common question for anyone with brown skin tone), they say France! Sadly, neither me nor their Papa have any direct connection to France, I just happen to have studied the language and decided to pass it on.

2. I love seeing my children chattering away with their French buddies, friends they would have never made if they only spoke English. Also, we are planning a trip to visit some of those friends this summer.

3. They’ve picked up loads of super cute French sayings, like my son yelling “Tchac!” when playing the French equivalent of ‘Bash.’ Schmoo acting like a French tween with phrases like “Ben, oui, hein?!” (something like, ‘Well, of course, duh!’)

4. I have learned more French because of all the new words Schmoo’s taught me. She keeps coming home from school with new vocab, and then there are all the words we learn together doing her homework (I always keep my iPhone with its WordReference app handy). In fact, I am improving and keeping up my French altogether. At first I was mainly learning child-centric words, like ‘le pot’ (potty) and ‘le doudou’ (comforter), but now the books I read with Schmoo are far more grown-up, about the level of Roald Dahl stories. And because of the need to keep up, I make more of an effort to read books in French myself, listen to French radio and talk in French with the francophone mums at the school gate (even though most of them are fluent in English). I’m sure that if I hadn’t gone the bilingual route, my French would be desperately rusty by now.

5. Feeling less self-conscious when telling the kids off in the supermarket! Knowing that most people around can’t understand your threats and/or bribes really takes the edge off feeling judged when the little ones misbehave. Promising a kingsize chocolate bar if they get up off the floor NOW?! Don’t worry, no one’s going to frown and shake their head in disgust at the bad mummy who can’t control her children without a massive bribe

6. The children being able to read wonderful classic stories like Tintin and Le Petit Prince in the original. Some things do get lost in translation

7. Discovering and celebrating twice as many festivals. In addition to all the English ones, we now have La Galette des Rois (Epiphany, where a ‘King’ is chosen by discovering a token in a cake) in January, le 14 juillet (Bastille Day) in July and a second Mother’s Day in May!

8. Research (The New York Times, “The Bilingual Advantage,” 30 May 2011) has uncovered the many pluses of bilingualism, e.g., bilinguals get Alzheimer’s later in life than monolinguals and are better at discounting useless information when trying to solve a problem. All great news (and something to remember in sticky moments).

9. My children code-switching (i.e. switching from one language to another in the same conversation, sometimes in the same sentence)—this is generally considered a bit of a no-no as surely, people say, it’s confusing to them and the person they’re talking to?! But my children are used to talking to bilinguals—most of their friends and teachers speak both English and French, so it’s fine to slip a French word into an English sentence or vice versa. And they’re definitely not confused because they take care not to code-switch when chatting with monolinguals. For me, it just sums up how very bilingual they are, and that can only be a good thing!

10. Knowing they’ll have so many choices later on—they can choose between A levels or the Baccalaureat, go to a French university, get a job that requires French or even choose to live and work in France. Of course they may never use their French again upon leaving school, but I love that they have those options!