Children’s games are a great way to show kids the influence of culture on the games we play. Here are five fun suggestions of kid’s game from around the world to get started. All of these games can be played inside or outside so they are a good option in any type of weather. They can also make perfect party games.

Cultural Games for Children From Around the World

Tinikling is a popular dance in the Philippines that is based on the movements of a tinikling bird. It is similar to double-dutch jump roping but with the use of bamboo poles (broomsticks make an acceptable substitute) instead of rope. It requires a minimum of three people to play–two to hold each end of the poles and one to jump in and out of the space between the poles. Rhythm is maintained by the kids holding the poles and slapping the poles together.

Here is a great tutorial on tinikling. You can also see a more traditional style of tinikling here.

Ever heard of the game Kabbadi? Kabbadi is so popular it has become a worldwide sport. The sport can be a bit rough, but the game can be played in a lighter, gentler way.  Kabbadi is a game that requires strength, speed, and some serious lungpower.

You need a wide-open space and two teams, both divided equally. It’s a variation on the tag where one player from one team called the “raider” is pitted against the opposing team. The raider must try to tag as many players as she can on the opposite team on their territory while repeating the word kabbadi and holding her breath, and without being caught by that team.

Often the team will hold hands to form a barricade making it harder for the raider. If the raider crosses the boundary line back to her side without having to catch her breath, all the tagged players are out. If the raider catches her breath while on the opposing team’s side or gets caught, the raider is out. The object is to tag all the members of one team out. The members of each team will decrease with each round. Wikipedia has a good explanation of the rules of Kabbadi.

You can also check out this video showing kids playing kabaddi.

Pass the Parcel is a popular party game that can be played by people of any age. It can be played indoors or outside depending on how you choose to play it. You take a “surprise gift” and wrap it in multiple layers, using different colors for each layer to make it easy to distinguish them. To begin, the kids should stand in a circle. Then turn the music on. When the music stops, the player holding the gift removes one layer. Then, the music begins and stops again. This continues until the last piece of paper is removed. Typically, the kid who removes the last layer gets the “prize.”

There are variations of what to do when a layer is removed. To make it a more active game, you can have a note on each layer telling the kids to do something fun or silly—for example, do a funny dance, switch places with another person, hop on one leg to the center and back, etc. Another variation is to include a small gift with each layer so everyone gets something. Here’s a demonstration on how to play Pass the Parcel.

Luta de Galo is Portuguese for “fight of the roosters.” It is played by two children, but more kids can play by taking turns. Each player will need a handkerchief or a piece of cloth tucked into a pocket or waistband with enough of it hanging out so that the other person can grab it. Both players need to cross their right arm across their chest since they are not allowed to use it. Then, hopping on one leg, each player must try to capture the handkerchief from their opponent using his left hand. If the child puts the other leg down or unfolds their right arm, he is disqualified.

Watch these two people demonstrate how to play Luta de Galo. A variation to this game would be to have several kids play at once. The last person who still has his handkerchief is the winner.

All of these games are very popular for a reason–they’re really fun! Give them a try!

Do you know any fun games from other countries? If so, we would love to hear about them.

Photo by George Barker on Unsplash 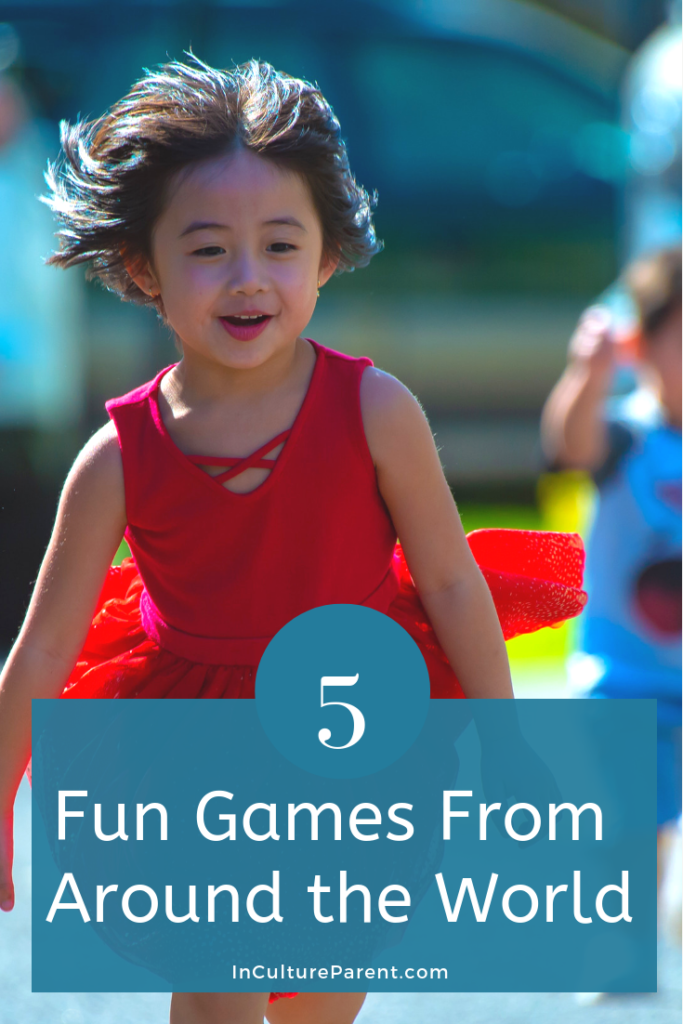