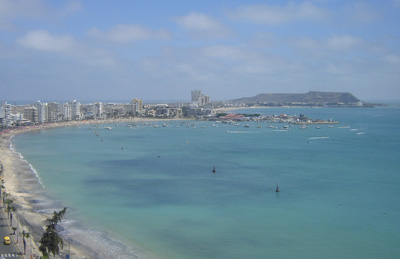 Every year I go on a two-month pilgrimage from San Francisco to Quito, Ecuador with my two kids, ages nine and five, so they can practice Spanish and get immersed back into my culture. I’m originally from Ecuador, but my husband is from North America. He grew up in Hannover, Massachusetts in a house located next to his dad’s veterinarian hospital. Grandpa seldom practices medicine anymore but is an obsessive hiker, animal lover and somewhat of an expert on animals of the area.

Four years ago, my sister and I rediscovered Salinas beach in Ecuador, where we used to go with our grandmother. At the westernmost tip of South America, Salinas is formed by two half-moons that create giant pools of warm water.

Returning to Salinas with my kids brings back so many fond memories: staying out all day playing in the sand or the water and hanging around outside eating snacks sold by the locals. We are so happy to be able to provide the same experience to our own kids.

I was leisurely sitting under a tent with my 20-year-old nephew chatting, when I heard a discussion between my daughter Isabela and my niece Daniela, as they returned from seeing the fishermen’s daily catch—the fisherman had set their nets right in front of us. The arrival of the fish is one of the kids’ favorite activities each day in Salinas. They were carrying something we could initially not identify.

As they got closer, we could see they were carrying a big, beautiful starfish and arguing.

“No, it’s mine and I’m going to take it back home and hang it in my room,” countered Dani. (I understood her desire to try to take part of our time in Salinas home).

“I’ll give you all my money if you let it go,” Isa responded. (Her money is a couple of dollars my parents had given her in Quito before we came to the beach).

“I found it and the fishermen gave it to me, so it is mine,” insisted Dani.

“No! It is not yours. It is alive and has a life of her own, so it doesn’t belong to anyone but herself,” Isa explained.

I felt so proud of her and since she definitely had a point, we had to intervene. We explained to Dani that it indeed had a life of her own that deserved to be respected. She and other kids who joined in after seemed to understand the message. Persuaded by that argument, they all then fall in love with the “poor starfish.”

They took it to the water, bathed her and after a little while we all concluded that she needed to go back home. Since she needed to get away from people who may harm her, it was deemed necessary for me to go and deliver her into the ocean as far away as possible.

Here I am then. I think I have swum far enough to send her on her way. Although we are in Ecuador, I realized that a part of my daughter’s New England veterinarian grandfather is here too with her and forms part of who she is. I drop the starfish and swim back with a sense of mission accomplished, both from the delivery of the fish and mostly for the eloquent way that my daughter defined why an animal should be respected. Don’t think her grandpa could have done it better.