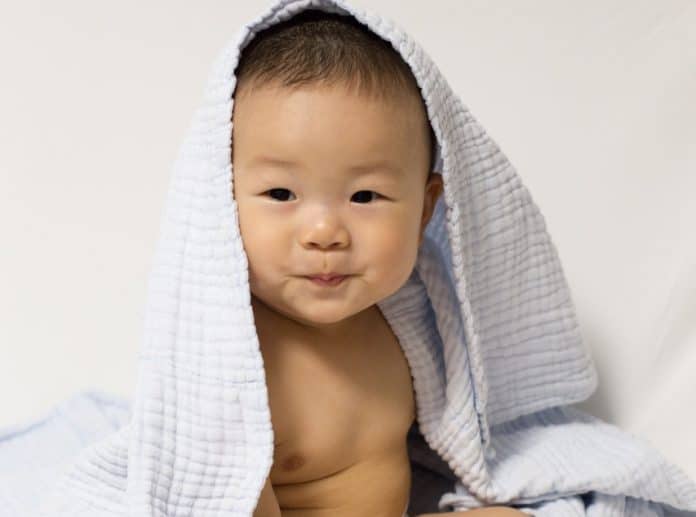 I never fully understood the real feeling of pride until I had a child. There are depths to the feeling that I’d never mined. It’s like a geyser of emotion sometimes, flowing out of me in an arc of absolute wonder. I’m so proud of her, so often. It saturates my entire being.

We live in China and have been pushing the EC method or “Elimination Communication” method since she was four months old. This is the fancy term for something that has been practiced in China for centuries. Children here are often fully “squat trained” (rather than “potty,” as those are newer inventions to the culture) by the time they’re 10 months old. In fact, if they can stand and squat, most of the time it means that they can also do their potty business without any fuss. Traditional Chinese methods have their advantages, for sure.

We have had our ups and downs with this process. The use of diapers, being a sign of the affluent—especially the disposable kind—was often the subject of arguments in my household. My MIL (mother-in-law) seemed to find countless excuses to use the expensive disposable diapers that we’d been gifted by their well-meaning friends. The rationales were very diverse, but they mostly centered around not wasting them, which was ironic considering they’re the very symbol of (environmental) waste to my Western eyes.

When my daughter, Echo, was just a small infant, we started to hold her over a pot or a bucket when she needed “to go.” We accompanied this action with a “shh’ing” sound. Mine was more of a “Sss’ing” sound, but it didn’t seem to matter if there was sound or not. Her body responded to being put in the “dangling” position and she’d often release her bladder or bowels even in silence. We still used diapers (me insisting on cloth as often as I could intervene) and we managed to save their laundering about half the time with this method.

It was all about timing, after all. If we remembered to hold her over up over the bucket (or toilet or grassy area) every half an hour or so, at minimum, we would likely catch her before she had already gone in her diaper. Sometimes life doesn’t accommodate such a strict schedule of elimination service, however, and so diapers would still need changing.

When Echo was about eleven months old, she started to indicate her own elimination needs. She would fuss or vocalize with a certain pitch that I came to understand meant, “Take me to the toilet, ya dumb mommy!” Most of the time, she would go in the toilet when held above it, Mommy’s hands under her bent knees with her little baby bum dangling. I was proud, proud, proud.

Then came her self-weaning from breastfeeding (and mommy’s grieving about that) followed by her sleep issues, during which we struggled with trying to teach her how to sleep on her own rather than co-sleeping, which was no longer working for everyone. But, sleeping away from Mommy meant that she stopped telling me when she needed to go to the bathroom at night, and wet diapers started to pile up. Additionally, at around 13 months, she would occasionally resist being held over the toilet during the day by squirming out of our grip, only to pee in her diaper moments later. Not only was it a reaction to so much change, but I think that was the beginning of my child’s push for independence. I wonder where she gets that? Hhmm…

Lo and behold, after the dust settled, a few dry diaper nights began to present themselves once again. She would cry from the crib and would then willingly be taken to the bathroom like a sleepy sack over our shoulders in the middle of the night. This was when we began to let her sit normally on the toilet, like a “big girl,” balancing on the edge of its too-wide hole and leaning into mommy or daddy’s knees, half-asleep, while we held her under her arms. We would coo, “What a good girl for peeing in the toilet!” into her little ears after she went, and then put the dry diaper back on before putting her back into her crib for more “sleepy time.” I’d return to our bed just beaming with pride for my smart little baby. I mean, it’s smart not to want to sleep on a wet cloth, isn’t it?

Dry diaper nights then became the norm when our environments were consistent (i.e. not traveling) and at 17 months during the daytime, she started to point to her crotch area (or her bum) and verbally signal us when she needed to go. Sometimes this meant that she had just wet or soiled her diaper, but most of the time it was preemptive messaging. If we scooped her up, peeled off the diaper (careful not to spill it just in case it was already full!), and immediately took her to the bathroom, she would invariably go in the toilet. This practice even continued during our two-month journey back to my home country of Canada during this past summer. Pride oozed.

But nothing prepared me for the sudden shift that happened when we returned to China, to our home with the little plastic potty that we’d purchased from Ikea in the spring. An independent child like ours clearly prefers being able to call the shots. Letting her wear the Chinese “split pants” or “crotchless pants” (kaidangku 开裆裤) during the heat of the day at home, or just go around with a naked bum, meant that she could easily sit on the potty whenever she wanted. She’d sometimes tell us in advance and sometimes wouldn’t say anything until she’d filled the potty and wanted us to clean it out, and then she’d come to find me pointing wildly at the potty and looking at me with such an expectant expression while babbling in her own toddler language. I’m sure she was saying, “What are you doing? You have a dirty potty to clean. C’mon already, Mom! Get with the program!”

That brings us to today. At nineteen months old, I think it’s safe to say that my daughter is potty-trained. It might be dangerous to type that sentence so boldly, I know, but when I see her use that potty so confidently, the pride I feel is so enormous that I could shout it from my balcony to the thousands of other ears that would invariably hear me in this over-populated city of Beijing.

Must Read: The Only Things Your Baby Needs

To think that a piece of toddler poop in a little green potty, swimming in some urine, is the source of an immeasurable, never-before-felt pride is, well, almost ridiculous, I know. But, it’s real. I’m SO proud. I’m positively bursting with it as it radiates off of all that makes me exist in this world.

Who knew that having a child would teach me, once and for all, what being proud really feels like?