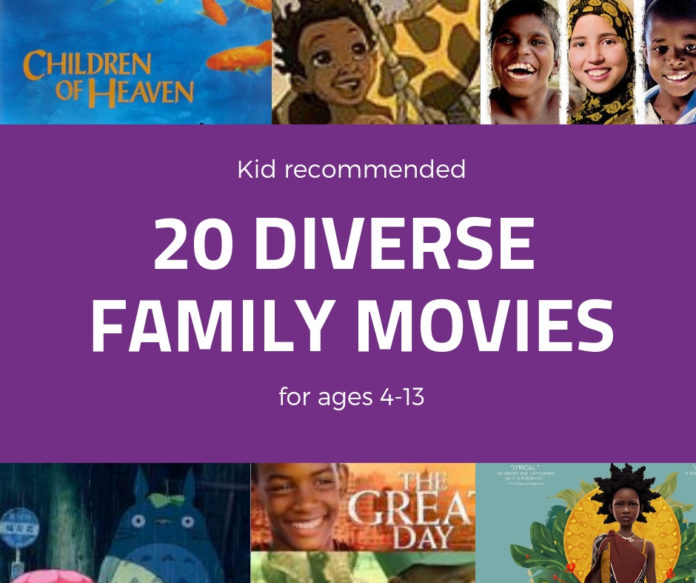 I am always on the lookout for quality, diverse children’s movies for family movie nights. I’m not the biggest fan of Disney and although many Pixar movies are wonderfully done, so many of them lack true diversity.

I love watching movies with my kids where the main character isn’t white and/or they take place in a different cultural context. I actively seek out diverse movies because when my kids passively consume any type of media, the main characters are predominantly white and the cultural context is usually white American, which begins to subtly influence my children’s perceptions of the world—whiteness becomes the norm as does America.

I want my kids to have a more realistic view of the world, as the majority of the world is not white and America is not the center that every country orbits around. I also want my children to see characters of color who are heroes. And it’s important for them to see storylines that don’t reflect their experiences and challenge their perceptions of the world.

Here are some diverse children’s movies that our family has enjoyed together.

My Neighbor Totoro – Available on Amazon

My Neighbor Totoro deserves first mention because it’s the top favorite movie of me and my children. The story is pure magic, featuring a creature, Totoro, that a family of Japanese children discovers when they move to the countryside to be closer to their sick mother who is in the hospital. It’s impossible not to fall in love with the whimsical Totoro.

If your family loved this movie as we did, you are in luck as the filmmaker, Hayao Miyazaki, has made many, many other wonderful children’s movies like Sprit Away and Kiki’s Delivery Service, under the animation Studio Ghibli. Check out them all!

The Red Balloon – Available on Amazon

A children’s classic, this artfully made film has very little dialogue and tells the enchanting story of a balloon and a French boy that become friends. Great for all ages. (Available on Amazon)

The animated film takes place in an Andean village during the Incan empire and features a 10-year-old indigenous protagonist who dreams of becoming a shaman. Released in French theatres in December 2018.

Kirikou and the Sorceress – Available on Amazon

An animated film set in Africa, the main character is Kirikou, a heroic toddler who fights the evil of the sorceress.

A truly unique story within a story, an elder in an African village tells the story of Zarafa to a group of children. The story involves the main character, a young boy who escapes an evil slave trader and travels from an unknown country in Africa up through Egypt and finally to France with some adrenaline-inducing and sad adventures along the way.

On the Way to School – Available on Amazon

Featuring the jaw-dropping journeys children in four countries (Kenya, Morocco, India, Argentina) make to the school, On the Way to School will give most children a fresh perspective on their own schooling.

The kids in rural Kenya dodge elephants and other dangerous animals on their two-hour walk to school while three girls in rural Morocco journey four hours through the mountains to arrive at school. Although this movie has sub-titles, it is also appropriate for kids who can’t read them as the journeys provide plenty to look at.

Similar in design to On the Way to School, The Great Day tracks the stories of kids in Cuba, Mongolia, Uganda, and India who each have a big dream, whether sports or academic.

The movie shows the perseverance and determination of kids pursuing their goals against their own cultural backdrops, which was fascinating for both my 10 and 11-year-olds and me. This is an inspiring and highly recommended movie but notes that it’s with subtitles! Only the Ugandan part is in English. (Available on Amazon)

This is a fun dance documentary that follows 10 and 11-year-old students from several NYC public schools who are training for a ballroom dance competition. (Available on Amazon)

If you enjoyed this one, Spellbound is a similar film that follows kids preparing for the National Spelling Bee. I loved that so many of the kids competing in the very American spelling bee were from lower-income and/or immigrant families, showing the true diversity of America. (Available on Amazon)

The inspiring story of Misty Copeland in a documentary that mixes interviews and dance scenes to tell the story of the first African-American principal dancer at New York’s American Ballet Theater.

A sweet story about two siblings in Iran who must share one pair of shoes as the brother loses his sister’s shoes and the family is too poor to buy a new pair.

This movie has subtitles but there are many parts of it without a lot of words where we just see the world from the eyes of children. My younger daughter was particularly touched by the movie and talked a lot about how we could have given the kids some of our shoes

Pele: Birth of a Legend

If your kid likes soccer, don’t miss this awesome film about one of the greatest soccer players of all time, set in Brazil.

My kids, both soccer players, loved this one!

Although this movie follows the usual American cliché plot (adversity, action, positive outcome), kids will still be inspired by Gabby’s story, especially how much hard work it takes to be an Olympic athlete.

One of the only cartoons I have found that takes place in Afghanistan, the main character is an 11-year-old girl that must pretend she’s a boy to help her family survive after her father is imprisoned. Women aren’t allowed to leave home without being accompanied by a man. The movie isn’t shy to portray the injustice and violence of the Taliban’s rule and will inevitably stimulate a lot of questions in young minds, so be prepared for a discussion!  I like that the movie isn’t afraid of tackling a hard subject for kids and doesn’t necessarily try to sugarcoat any of it. (Available on Amazon)

This is the awesome, true story about a resilient and smart girl from a slum in Uganda who becomes a champion chess player. Despite her difficult circumstances growing up in poverty, this movie shows kids that with determination and support, you can achieve anything you set your mind to. There are also some gritty scenes in the movie that may surprise children—a flood during rainy season that a toddler almost gets swept away in for example. Overall, this is a really fun movie the whole family will love. (Available on Amazon)

I love that this movie features the Maori community in New Zealand and their beliefs as well as a feisty and powerful heroine who challenges traditions.

A funny story about two soccer-loving girls from very different families in England. There are some advanced themes in this film (dating, kissing, a little bad language) making it better suited for tweens, but I watched it with my then 9 and 10-year-olds and found the positive girl role models and soccer theme outweighed the small parts I found a little too old for them.

A soon to be classic, this is a rare Hollywood movie that boasts a nearly all-black cast, amazing female role models and the setting in the fictional nation of Wakanda makes for some great costumes. There is more violence from a few fight scenes than I typically allow my kids to see but it’s overall a very positive movie for kids. I loved how the movie inverted many stereotypes about Africa with Wakanda being the most technologically advanced nation on earth. I took my girls who were 10 and 11 to see this one at the theatre in Oakland when it came out. (Available on Amazon)

This dramatic tale is about a group of Jewish children’s escape from Nazi Germany to neutral Switzerland during World War II.

The story is suspenseful and manages to be light enough, with some humor as well as a happy ending, to make it kid appropriate despite the very heavy subject matter.

This is the story of three brilliant, black women who worked at NASA as human computers and the discrimination they faced in the 1950s as well as their triumphs.

I liked the combination of a gripping plot, historical context, and strong female leads.

This unique movie uses film as a medium to help heal five orphans in Swaziland who tell their own harrowing story that is set to animation.

It features the unique blend of documentary film making and animation.

This was still in theaters at the time of writing but look for it soon to rent. There are still upcoming screenings in many cities–you can find a list here.

And finally, here’s a list of even more diverse movies, including a mix of Disney, foreign films and Pixar. We haven’t seen all these movies below but if you work through the aforementioned list of diverse family movies, here are some more to have on your radar. 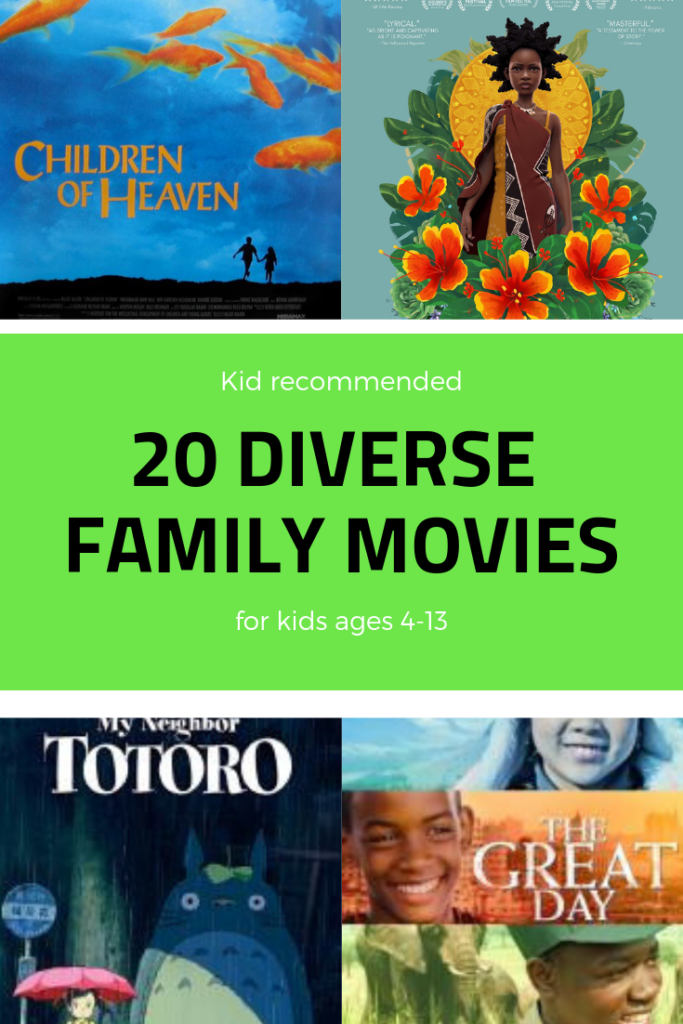