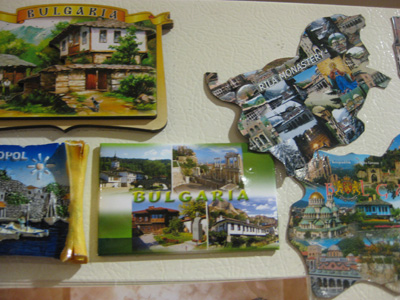 A few months ago, my husband and I had the pleasure of eating like Bulgarians for a night, thanks to our generous host and hostess, Nick and Milena Koshar.

The Koshars are from Bulgaria but have lived in the U.S. for nearly two decades now. We were connected with Nick and Milena through what I like to call the adoption woodwork effect. That is, by way of the adoption journey, you meet all kinds of new people or are connected in a new way to people you already knew.

Although we love trying new foods from around the world, the real reason for our fascination with Bulgaria is that we’re in the process of adopting from the Koshar’s homeland. And now, with a year’s plus of training, paperwork and waiting under our belts, we’ve accepted a match with a little girl and were preparing to make our first of two trips to Bulgaria (the first to meet her, the second to bring her home) just after this dinner.

Come along for a culinary tour of traditional Bulgarian foods (a feast, really!) that Milena generously prepared for us that evening, along with a few mementos reflective of their culture:

The Koshars have tons of trinkets, magnets, and postcards from Bulgaria throughout their home. I loved how many of the magnets and postcards were shaped like the country.

There were many religious icons throughout Nick and Milena’s home. Most Bulgarians are Christian Orthodox, which is similar to the Greek Orthodox tradition.

Feta is a Bulgarian staple. Bulgarian feta cheese is different from Greek in that it’s not as dry, but it’s still deliciously salty—which is why I love it so—and just a tiny bit sour. Here, it’s sprinkled with paprika for some extra zest.

Olives, feta, and a variety of smoked meats, including lukanka, which is a popular dried, smoked pork that Bulgarians love (these are on the left side of the plate).

This edible masterpiece is called a banitsa. The delicious dish is often served for breakfast and is best described as a cross between a quiche and spinach pie (sans spinach). How can it not be delicious, considering the main ingredients, besides the dough, are eggs, lots of butter, Bulgarian homemade yogurt and feta cheese?

Although it was hard to make room for it after all the glorious appetizers, this scrumptious main dish was comprised of baked eggplant, peppers, onions, olive oil, and tomatoes, finished to perfection with a crusted layer of mozzarella.

As if there weren’t already enough things to taste, we also enjoyed a hot lentil soup with plenty of garlic, and a cold tarator, a tangy, fresh-tasting soup with olive oil, yogurt, celery and cucumbers.

My plate, with homemade Bulgarian yogurt and a cross-section view of the stunning and savory banitsa.

Milena and Nick sent us home with lots of leftovers, including an entire jar of homemade Bulgarian yogurt. The jar originally held lutenitsa, which is a little like salsa.

This banner in Nick and Milena’s family room reads, “PRESERVE THE BULGARIAN HERITAGE!” We were glad to be a small part of that, and we’re excited to preserve our daughter’s Bulgarian heritage by integrating some of these traditional foods and customs into our home.

Bulgarian food is a terrific blend of Mediterranean cuisine and the country’s own traditional style (developed over more than 13 centuries), which makes sense given the country’s southeastern European location and its ancient history and heritage. I can’t wait to tell you about the tastes, sights, sounds, smells and textures of Bulgaria from our visit!

What Confused Me Most about Brits