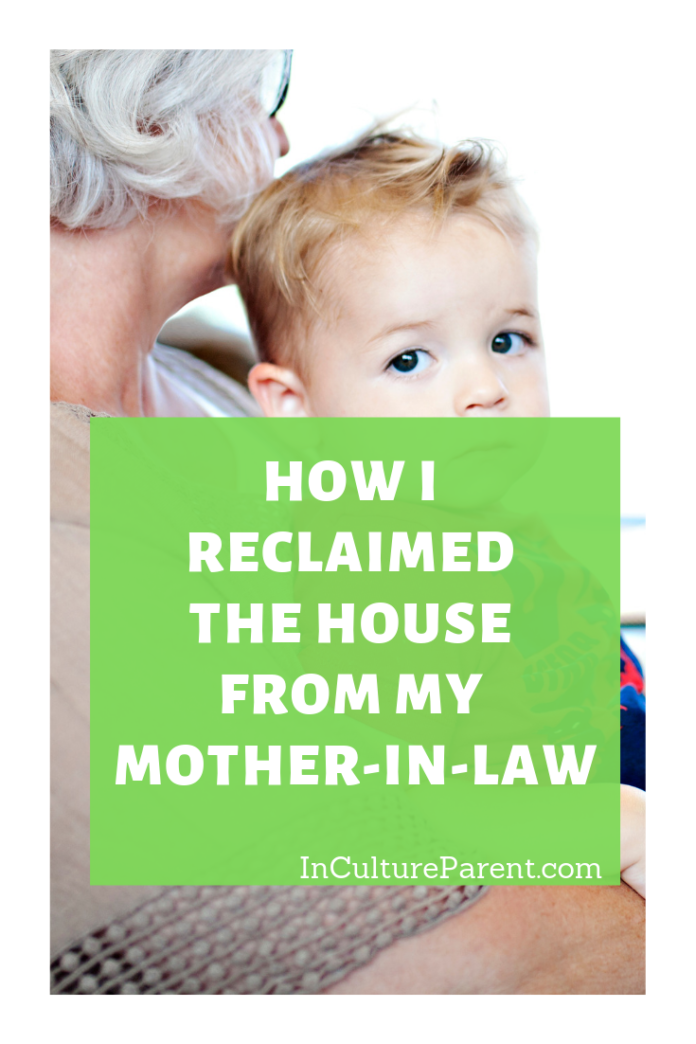 I am standing at my kitchen sink here in Beijing. I’m about to wash the day’s final few dishes in a kitchen that I can now spin around in knowing every item is placed exactly where I want it; every cupboard has been cleaned and ordered, the floor is clear of clutter and my beautiful spice rack containing gems like oregano, curry powder and basil is, once again, front and center beside my stove. There’s a small smile on my lips—something you’d rarely see while I’m doing something as mundane as washing dishes—but this is a momentous accomplishment. A marching band is parading up my spine and relaxing my shoulders. It’s a coup!

Ever since my daughter was born 14 months ago, there’s been a war between cultures in my household. As the Canadian underdog surrounded by Chinese culture, I’m the one who has had to be more flexible, particularly related to the Chinese tradition in which extended family comes to care for both the infant and the new parents. In my culture, the new grandparents might come and stay for a week or two after a baby has been born, but then they leave. Their role is to assist with the transition into a new family dynamic, but Western parents are still guests in their grown-up child’s home. Parenting choices remain solely in the hands of the parents, without question.

My mother-in-law moved to Beijing when I was in my final month of pregnancy, a move that required great sacrifice of her career and lifestyle, not to mention her leaving behind her husband and aged father to fend for themselves. However, in a concessional move for our cultural divide, she rented a small apartment rather than moving into ours. I was relieved—I could think of nothing more uncomfortable than suddenly living with my mother-in-law whom I barely knew. Still, no one but me found it unusual for her to spend 12 hours a day in our home. She burst in and took over all the shopping, cooking, cleaning and general housework. That’s all on top of providing childcare for our new baby. Her energy astounded me.

I wasn’t prepared for the immensity of her role. A strong, spirited woman, she acts a bit like commander-in-chief in all she does. After my initial postpartum recovery period was over, every desire I expressed for independent control of parenting or managing my own household was perceived as a direct challenge to her generational authority, and by extension, a sign of my ingratitude for her incredible contribution. Imagine the conflicted feelings of relief to have such assistance—like I’d won the lottery—and annoyance by its controlling imposition.

What’s more, my husband became very comfortable with his mother doing everything; it made our relationship miserable. I resented his sexist dependence on her and doubly resented her sexist expectation that he would be useless in either the domestic or parenting realm.

After a whole year of this haranguing arrangement, I boarded a plane with my daughter, relieved to have Christmas as an excuse to escape home to my own country. My husband couldn’t come with us, so I travelled solo with my daughter and thus was the only one responsible for the shopping, meal preparation, cloth diaper washing, and cooking for friends and family whose homes we were staying in, all while managing my daughter’s potty training and sleep schedule with a keen eye. I discovered something invaluable: I could do it. Despite the six weeks of exhaustion, I was empowered.

It helped me understand my husband slightly better, as well. There’s nothing like the presence of someone insisting on doing everything to make one doubtful of one’s own abilities to do anything. I discovered that being steamrolled by a strong figure could quite often be mistaken as laziness.

While independent in Canada, I also took the opportunity to teach my daughter how to sleep on her own. With remote support from my husband, we took it slow, but I was consistent. She returned to China able to go to bed without crying and wake with a smile—a feat my mother-in-law began bragging about to her friends immediately.

Still in the spotlight from this accomplishment, I pulled out the big guns and engaged an unusual tactic in this game of cultural roulette. I called a formal family meeting over Chinese New Year. I even asked an extra family member to be present as a mediator. Because my lone Canadian voice is so often drowned out in discussions such as these, I did a fair share of mental preparation and began the proceedings with confidence and conviction, despite my imperfect Mandarin.

Focusing on gratitude and acknowledgement of both her efforts and contributions, not to mention the benefits it has brought the whole family, I framed my need to recover independence around her inevitable ability to relate to such a desire, being the strong, independent matriarch that she is. I also appealed to her love of her granddaughter—a child of both cultures—who would need a balanced set of influences to reflect her cross-cultural heritage. “How would it be for her if we move back to Canada and she can’t get used to the food?” I asked, knowing this is a constant worry for Chinese people when they leave China. “Her mommy needs to cook for her too.”

But the real stroke of genius lay in the presence of mediation, and particularly choosing someone who was of my mother-in-law’s generation, namely my husband’s aunt. Initial defensiveness was immediately challenged. “What is your problem?” she was asked. “Doing less is a good thing! You can enjoy your granddaughter and your retirement!”

Before I knew it, the victory was handed to me. She agreed to continue to provide childcare on a daily basis but in her apartment. My daughter now spends part of every day with her nainai while we go to work. We’ve even set up a crib there. Nainai cooks for her and we still often join my mother-in-law for meals—grateful to still have an invitation to enjoy her cooking—but we don’t share every meal. Back at home, my daughter eats what I cook and benefits from time alone with her mommy where the language is exclusively English. Her daddy has returned to the man I married—someone who might not always want to pick up his socks but will do it in the end. But the biggest relief is that he’s reengaged his fatherly role without question; our daughter’s needs are back to half his responsibility again. Now that’s what I call winning the lottery!

So tonight, as I begin to dry the dishes, I pick up one of my white tea towels that I discovered stuffed in a drawer (as Chinese people rarely dry dishes) and I can’t help but smile again. It’s a white flag of truce and victory. I’m waving it in my kitchen right now. My kitchen. I take a deep, peaceful breath. Can you hear the happy trumpets blare?