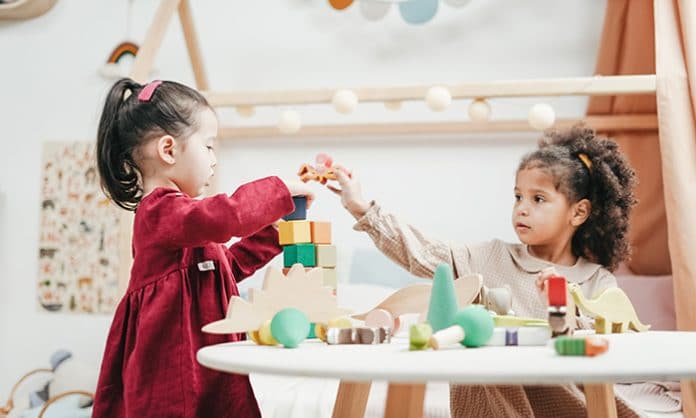 When you join two cultures through marriage, like my husband and I, you know your children will live in the land between, never truly belonging to one or the other. From observing my Dutch parents growing up and my Greek husband as an adult, though their cultures and paths were quite dissimilar, they experienced this suspension between their birth culture and the one of their everyday lives, as a bi-product of immigration. What then for the child we adopted from Africa? Where does she live? How many in-betweens does she represent?

Having three children and experiencing multiple cultures allowed me to observe that their cores are similar, under an exterior of bountiful uniqueness. But how does that apply to siblings who are culturally diverse from each other? Adding to our family through transracial, international adoption only magnified this realization that a familiar sameness resides at the center beneath the diversity.

My eldest son, Dimitri, was 11 when his sister came home. He was actively involved throughout the adoption process, wanting to understand the paperwork and home study, and even giving me some tips along the way. His biggest fear was his little brother would blow it by saying something he shouldn’t. His specific words were, “What are we going to do about Damian? You never know what he is going to say!” which is true even now. He was also astute enough to pick up on things that weren’t said. After a conversation with our social worker, he commented, “She just asked us a bunch of questions to make us feel we were a part of it.” Damian at the time was seven and far less interested in the process, although he enjoyed meeting the social worker. A fun-loving, goofy chatterbox by nature, he finds conversations with random adults quite engaging and looks for—or in its absence, often creates—the absurdity in life worthy of a laugh. He is much more circumspect with his inner self, which is masked by his bubbling persona.

They were both very excited about a new little sister and wanted a baby. Dimitri was also pleased with the possibility of gaining a sibling with a different skin tone which I learned unexpectedly when we were considering adopting from Russia. When I mentioned it to him, he asked me, “Why would we do that? Then she might look like us. Being a diverse family is much cooler.” Wow, that really hadn’t occurred to me. Damian initially struggled with the concept that a member of the family could look nothing like the rest of us. He is a linear thinker and likes to find the order in everything. Transracial, international adoption defies such attempts. My eldest contemplated much deeper thoughts that many prospective adoptive parents also wrestle with too. “Would he love her? Would she love him?” Those bonding concerns, if they persisted in my Damian’s little pointed head, were never expressed. Although given his private nature, I suspected they lurked beneath the surface.

When their sister arrived home as a beautiful six-month-old on my birthday, their personalities were reflected in their relationships with her. My eldest was a nurturing presence, hovering around whenever she needed something. He even referred to himself at one point as a third parent. My youngest focused on making her laugh – she ironically looked a lot like him as a baby (beside the obvious difference in skin tone and hair), which people commented on with some frequency. They both unequivocally, unconditionally adored her.

My husband joked about the positive effects of bringing a girl into the house, “Maybe she will tame the little savages.” I was skeptical, but it turns out she did in many respects. As she has grown into a verbal, confident three-year-old, she made her place in the family known. She is in charge—we all do her bidding and happily. Dimitri is her go-to person for sympathy and support. If she gets in trouble or hurts herself, she calls out, “I want my MEESHI!” (using her early pronunciation of his name). She seeks out her other brother for laughter and fun asking things like, “Where’s Damian? I want to knock him down and tickle him.” Their faces soften when they talk to her. And when she wakes up, she asks, “Where are my boys?”

We changed the course of her life and her culture when we brought her home from Ethiopia to join our family. But she also changed the course and culture of each one of ours. While I expected this for my husband and me, the immense change she precipitated in each of her brothers is more amazing to me. Dimitri was given the opportunity to show flashes of the father he will likely be. He has a new appreciation for the caregiver role and lets himself be vulnerable and open to his little sister in a way that defies the throes of the teenage years. Damian found a kindred spirit for many of his interests, from eating to music to generally being a goofball. He discovered the joy of being an older brother, and revels in holding that place in someone else’s heart, as his older brother always has in his.

They both are now connected to the culture of a land geographically far away but close in many of its manifestations. My three angels—Dutch, Greek, Ethiopian and American—are pictured above, a moment before they burst into laughter together. A fuller understanding of the different in-betweens they represent will likely reveal itself as they grow up. But like any other siblings, they will continue to share an intense and abiding love for each other throughout their journey of discovery.