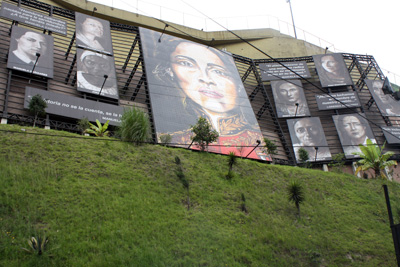 As I relive the city of Quito of my childhood with my kids, so much has changed. There are so many more possibilities for families to experience the city. Quito is almost 9,000 feet high and located in a long set of valleys in the skirts of the Pichincha volcano. It is composed of a beautiful colonial downtown, which is the center, the southern part of the city, which is an industrial area, the busy northern part, which is the modern town and where the financial area resides, and a couple of nearby residential valleys, including the very prosperous Cumbaya valley where the San Francisco University of Quito resides. Though the city was quieter, safer and less populated when I was a child, there were few parks and facilities for middle class families. The Quito of my childhood was one that had a small middle class, a small upper class and a large, poor lower class. Classism, racism and lack of diversity from Colonial times were also pervasive in the Ecuador of my childhood.

As I have explored the city with the kids, visiting friends and family, parks, museums and even malls to watch the world-qualifying soccer games on a big screen, I analyzed what has happened with the city in the past years.  I realize that Quito still drags its feet in certain areas, but it is definitely a step ahead in others. To my surprise, I still heard racist comments about the soccer players, who are mostly afro-Ecuadorian, when they lost the games (if they won they were kings). I still saw perfectly manicured, enclosed neighborhoods while the city, particularly the nearby valleys, lacked city planning that would benefit all, and I still saw poverty.  Also, as the city has grown, the culture of respect for the pedestrian has not and you have to cross the busy streets very carefully so that you don’t get run over.

But even though I was bothered by all these issues, I was also delighted to discover positive changes.  Though a privileged upper class and poverty both still exist, the city now is mostly composed of a large and vibrant middle class. This middle class, who gained a lot of liquidity in the past 10 to 15 years due to a considerable improvement in economic conditions and job opportunities in Ecuador (complex to analyze), is now eager to use good public facilities. Though you can still hear undesirable comments, people are now respectful and wanting to promote religious, racial and sexual diversity.  When I grew up there was always an admiration and desire for anything foreign. Now there is a strong sense of Ecuadorian pride as well as recognition of Ecuadorians as multicultural, diverse people.

As we visit the museums and parks, I see beautiful photos of the diverse cultures and races of the Ecuadorian people on large displays. As I go around shops and restaurants I see pride in consuming and buying what has been made in Ecuador, such as the Ecuadorian straw hats known as Panama hats, coffee and chocolate.

Since the school year in Quito ends at the end of June, I have not been able to send my kids to summer camps and have been constantly searching for places to go within the city. Though there is much more to be done in regards to public facilities, the city has a lot more to offer now to families.

We have gone walking in the amazing Parque Metropolitano, a huge and gorgeous public park on a hill between two valleys, with amazing views of both valleys, that has several play areas for kids.

You can easily loose yourself on long walks throughout the forest and rent areas for barbecuing on the weekends. We have gone to a couple of other parks such as the La Carolina Park, in the middle of the northern part of the city, where we rented bikes one day, boats on the lake on a different day and visited the Botanical gardens within it. We have explored the Itchimbia Park, situated on a hill between the New and Old town, where you can walk or bike around with amazing views of Old town. On top of the park, there’s a beautifully restored glass building that used to house an old market and has different exhibits throughout the year as well as a nice restaurant below it. I have taken the kids to see a couple of grown up museums such as Casa del Alabado, a small colonial house in downtown Quito which has been restored and houses a great collection of pre-Colonial artifacts with interactive explanatory screens throughout, and Centro de Arte Contemporaneo, a newly restored old hospital that houses contemporary exhibits. We took a gondola (called Teleferico) up the Pichincha mountain and enjoyed a gorgeous view of the city and then went down and played at the amusement park below.

As a parent of kids going to a public school in San Francisco, I was delighted on my visit to the fantastic Interactive Museum of Science (the MIC), to see public schools on field trips there. The MIC is a large science museum for kids of all ages (and adults) that is located in an old textile factory and has ample gardens and exhibit areas.  We spent the whole day there, ate lunch at a nice coffee shop, loved the exhibits about the brain and the elements of physics and will come back to see the dinosaur exhibit and the parks.

Another day, we visited the Museo de la Ciudad (housed in what used to be an old hospital) during our visit to the old town. Museo de la Ciudad is a beautiful museum with permanent exhibits, showing interesting displays on the history and way of life in Quito during Colonial times, the visit of the scientists who came in the 1800s to measure the center of the world and a history of the old hospital, plus some more temporary exhibits. We have a lot more to explore within Quito, including walking around old downtown visiting the churches, and all the museums, displays and restaurants there, The Water Museum, Mini City museum in Cumbaya, going to Termas Papallacta hotsprings an hour away from Quito, visiting the Middle of the World 30 minutes from Quito, The Museum of Guayasamin and the El Ejido park.  Also, my sister, who is currently living in Costa Rica with her two children, and my husband are coming to Ecuador and we will travel throughout Ecuador with them.

We are thrilled to be here and see new things happening within this vibrant city, which is hoping to walk ahead while preserving the charm of its old days, both in its architecture and values.