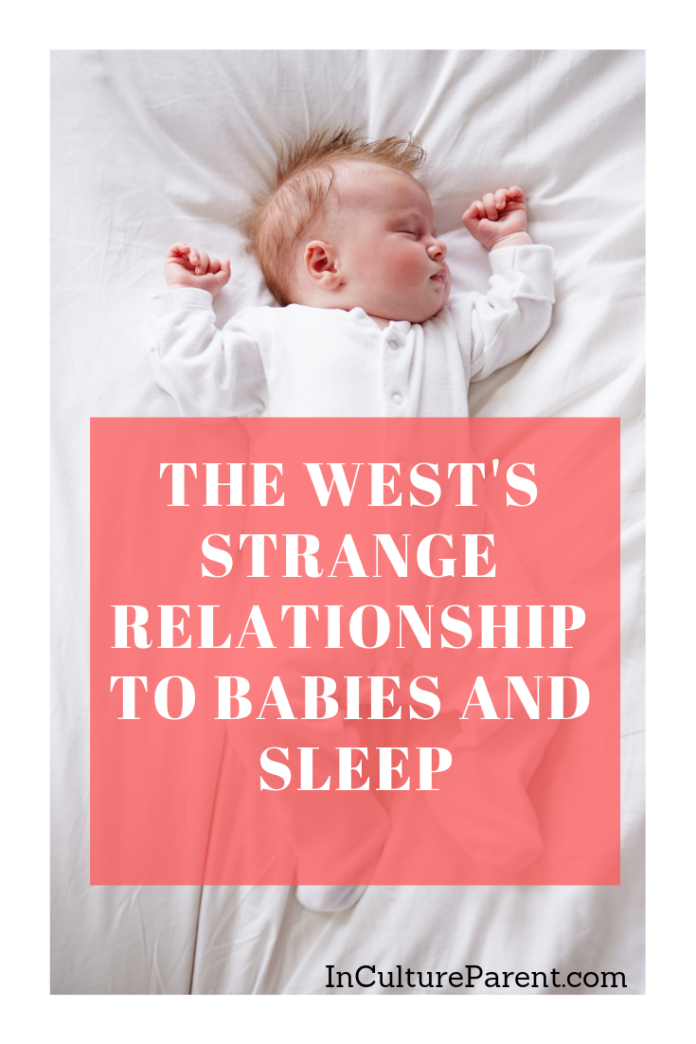 We have a weird relationship with babies and sleep in the West. I was reminded of this when I spoke to my German sister-in-law recently. She had just arrived back in Germany from Spain, where she was visiting her little sister who had just had a baby. My sister-in-law commented that the baby was great, except “she doesn’t sleep in her bed, only in the arms, so that’s a little hard.”

The sleep of babies is a very profitable empire. We have many books and experts on the topic—Dr. Ferber, Dr. Karp, Dr. Sears, and Dr. Weissbluth, to name a few. I’ve read them all. I may have even taken notes in the margins. Seriously. I had a colicky first-born, so in desperation, I poured over every book I could find.

The empire extends way beyond books, though; we have built a whole industry around the sleep of babies—creating the nursery (don’t get me wrong—I loved that part) and buying the crib, the crib set, the mobile, the rocker, the swing, and all the other gear. I remember my husband almost throwing upon himself on our first trip to Babies-R-Us in the U.S. when I was five-months pregnant. I insisted we needed the $300 five-piece crib set (bumper, blanket, sheet, ruffle and I can’t even remember the fifth item—oh yeah, diaper bag—who has time to be refilling a diaper bag?) and he thought I was out of my mind. I remember feeling quietly devastated we couldn’t agree on buying it because it was essential, couldn’t he see that?

In the majority of non-Western societies, babies sleep with their parents–if not in the bed, then in the same room. So do young children. It is only in industrialized Western countries that sleep has become a compartmentalized, private affair. In one study (Barry, H., & Paxson, 1971) of 186 nonindustrial societies, 46% of children sleep in the same bed as their parents while 21% sleep in a separate bed but in the same room. In other words, in 67% of the cultures around the world, children sleep in the company of others. Even more significant, in none of those 186 cultures do babies sleep in a separate place before they are at least one year old. The U.S. consistently stands out as a country where babies are routinely placed in their own beds and in their own rooms.

In the rest of the world, babies don’t need their own cribs and rooms because everyone expects babies to be close to the mother after birth—they only just came out of the mother’s body, after all. But the majority of Americans expect them to be in a bed all on their own, rather than snuggled up close to the same body they were inside of for nine months. Seems odd, doesn’t it? Most of us are taught this is the way. Because there doesn’t seem to be any other way, we have developed different methods within that way—no cry, cry it out, modified cry, etc. With my first child, I was both annoyed and baffled when she wouldn’t sleep in her crib. I assumed there was something wrong with my sleep training method or in my sleep routine even though it was flawless, just like all the books instructed. I didn’t think there was something fundamentally flawed in the entire approach.

I was reminded of this in my recent conversation with my sister-in-law because I think we have it all wrong when it comes to babies and sleeps in the West. I don’t think infants need to be in their own crib to sleep when they are so young. I no longer think it’s the best approach.

Issues like these are what fueled the creation of InCultureParent. While I know a decent amount about the world and other countries, I knew very little when it came to raising children in other countries and cultural beliefs around childrearing. Despite all the time I spent online on American parenting websites, I always felt the answers were different sides of the same coin and represented largely a white American viewpoint. While the rest of my life was filled with diversity in everything from the food I cooked, where I lived, whom I married, the books I read, the languages I spoke, the friends I had, the information I found about childrearing was all in the same dominant cultural vein. It didn’t mesh with the way I lived the rest of my life and yet this was the most crucial aspect of life now: my children. So I set out to discover what other cultures do, and this website materialized in the process.

With my second child, I was less of a sleep Nazi and let her stay in our bed a little longer before moving her to a crib. But she was still too young. At one year, she got her own room, rather than moving her with her sister because I was raised in the belief that every kid needs their own room. Now that I have really changed my thinking on this, it seems bizarre—why do we want babies and toddlers to be all by themselves, in their own little separate cubes away from each other and the rest of the family? Because they will wake each other up because I will be too tired at work, because—I get it. I thought the same thing with both my children. (They now share a room and a bed.) If we ever have a third, I would approach sleep differently, though. I would have no expectation of moving him (and yes, I’m assuming “he” would be a boy) to a crib until he is ready and he would likely move from our bed to a mattress on the floor, and then graduate to a room with his siblings.

Research on children and sleep also supports the benefits of co-sleeping. Heron’s 1994 study of middle-class English children found children who never slept in their parent’s beds tended to be harder to control, less happy, exhibited a greater number of tantrums, and were more fearful than children who always slept in their parent’s bed. Lewis and Janda in a 1988 study determined that males who co-slept with their parents between birth and five years of age had significantly higher self-esteem and experienced less guilt and anxiety. Yet for some reason, co-sleeping in the U.S. continues to be a practice that is advised against.

Based on all this, it’s no longer my philosophy to put an infant in a crib in a room alone. (As a disclaimer, if it’s your philosophy, I am not critiquing you. I’m a firm believer in whatever works for you as a parent and what you think is best for your child, so there’s no judgment implied. I also know it’s easy to have an opinion on these things when you are no longer suffering from extreme sleep deprivation. Who knows, in those circumstances again, I may opt to put my infant in another room out of desperation. When my firstborn was colicky, I had fantasies of leaving her outside the house to scream so I could just get a couple of hours of uninterrupted sleep….what the brain wouldn’t think for sleep.)

All in all, when we surround ourselves with Western books and parenting websites, we have a very limited view of the many ways to raise a child.