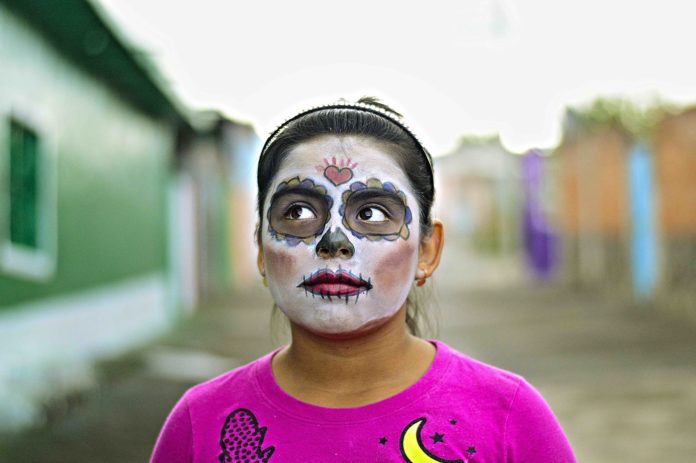 Mexico’s Dia de los Muertos (Day of the Dead) is a well-known holiday that, despite its motif of death, is a celebration of the lives of loved ones who have passed away. Originally derived from Azetc rituals, the holiday became connected to All Soul’s and All Saint’s Day after Spanish conquest, as the Spaniards tried to put a Christian spin on it. The streets of Mexico explode with vibrant colors and wild marigolds called cempasuchil on this very festive occasion and homes are devoted to the building of ornate altars. In small towns, some families open up their doors to everybody wishing to come inside and view their altar, and they offer passersby mole with chicken and tortillas.

According to myth, celebrants believe that the gates of heaven are opened at midnight on October 31, allowing the angelitos, or spirits of deceased children, to descend to earth and reunite with their families for a day of celebrating. November 2nd marks the descent of adult souls to join the festivities.

Ancestors are first welcomed with ofrendas, or offerings, that are placed on ornately decorated and carefully prepared altars. A wash bowl, basin and soap are provided to allow spirits to spruce up after their long journey from the underworld, along with candles to help light their way. Photographs of the deceased are set out and paired with favorite personal items from life, favorite foods and cock’s combs and wild marigolds are scattered over the altar. Other decorations include tissue cut-outs, known as papel picado, wreaths and crosses. The offerings typically denote the four elements of nature, with the paper cut-outs symbolizing wind, the candles fire, the wash bowl water, and the offerings of favorite foods as well as tortillas and pan de muerto representing the abundance of the earth.

Pan de muerto is a special treat enjoyed by Day of the Dead celebrants. This sweet bread is baked into a loaf, with remaining dough shaped into bones and skeletons and decorated with colored sugar. Dancers often don wooden skull masks to honor the dead, and skeletons or calacas appear along with other decorations to demarcate the welcoming of the dead on this holiday of souls and spirits.

The holiday’s skeletal theme can be seen in the most popular ofrenda–the calaveras de azúcar or sugar skull. The sugar art tradition was brought to Mexico by Italian missionaries in the 17th century, and was originally a method for decorating churches when more elaborate European religious trimmings were unavailable. Made from molds preserved for each year of celebrating, sugar skulls are sold by vendors in open air markets in the days preceding the celebration. They are decorated with colorful icing and sometimes with inedible items like foil, feathers, and sequins, and the names of the dead are often written on the forehead of the skulls.

Photo by Cristian Newman on Unsplash