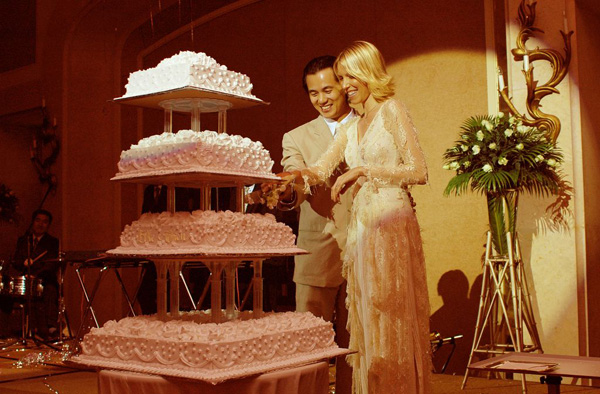 Elka and Thien are a multicultural family in Vietnam raising trilingual kids in English, Vietnamese and French and across cultures.

Elka: I was born in England. My dad is British and my mother is German. When I was very young, we lived in Africa, then moved to Canada.

Thien: I was born in Ben Tre, Vietnam and immigrated to Australia at three years old. I then moved back to Vietnam in 2003.

Elka: We met in Ho Chi Minh City, Vietnam, and have never lived anywhere else together. I’ve been in Vietnam for going on 17 years and Thien has been here for 10 years.

How come, Elka, you have been in Vietnam 17 years? What first brought you there?

Elka: I studied Journalism and Asian Studies at university in Canada, and was especially interested in Vietnam’s history. My first visit here was in 1992, and at that time, people weren’t used to seeing Westerners. I am very blonde and at the time, my hair was long.  By the end of my month-long trip, my hair was uneven since people had snuck up behind me and snipped bits off as souvenirs. After university, I moved to Vietnam “for one year” to study Vietnamese. Because Vietnam was so cut off from most of the world, I found it fascinating. Every day I’d look around and think: “What are those people doing?” Today, with access to MTV and the Internet, there’s less of that wonderful weirdness.

Thien: We were introduced through mutual friends.

Elka: And then we kept meeting by chance. On our first date Thien came over to my place to watch a video–and never left. I think it took about two weeks for all of his stuff to migrate into my apartment…We were engaged within two months and married before our first anniversary. Looking back, it was crazy, but I still feel really lucky.

Elka: Our five-and-a-half-year-old son, Solomon, was born in Bangkok. Our daughter, Eloise, who just turned four, was born in Ho Chi Minh City.

Thien: I hold Vietnamese and Australian passports and Elka has Canadian and British ones. The kids have British, Australian and Canadian. Since Elly was born in Vietnam, she’ll also be eligible for Vietnamese citizenship when she turns 14.

Elka: We speak English with the kids, but are lucky to have a live-in nanny who only speaks Vietnamese, which forces the rest of us to speak it too.

Thien: The kids speak English with us and with some of their friends, Vietnamese with their nanny and with other friends, and French at school and with French friends.

Elka: Last summer, we hired a lovely young French woman to come over and play with the kids in French for three hours each day. They did regular stuff like making crafts and playing hide-and-seek and riding their bikes—in French. We also try to read books in English, French and Vietnamese. Since I’m a writer and illustrator, I decided to create a couple of bilingual English-Vietnamese kids’ books to teach our kids (and other kids of Vietnamese descent) more about Vietnam.

Thien: We did have a Vietnamese tutor, but the kids did not enjoy it. We now prefer to have them do sports activities (such as swimming lessons or karate) with Vietnamese instructors to reinforce their Vietnamese.

Elka: Try to ensure that your kids spend time around kids and/or fun people who speak the languages you want to reinforce. When I hear my kids playing with other kids in French or Vietnamese I feel that their language skills are sustainable.

Thien: Try and find something that the kids enjoy doing whilst learning the language.

Elka: I’ve been known to worry! We waited until both kids were three-and-a-half before introducing them to French, by which time their spoken English was good and their Vietnamese decent.

Thien: I prefer to give the kids as much content as possible. Their developing minds are used to focusing on multiple things. The most important thing is to make it interesting for them.

Elka: My dad is a committed atheist, while Thien was raised as a Catholic. If I had to tick a religious box, I’d choose Buddhist, although my spiritual beliefs are too personal to be categorized. I discuss different religious perspectives with the kids and hope that by questioning everything they’ll find their own answers.

Thien: I was raised as a Catholic, but am now not practicing. The kids need to be informed of all religions so they can form their own opinions as they mature.

Elka: I have no interest in rugby and don’t eat meat. Australians are sports-crazy and Vietnamese people will eat anything that moves.

Thien: I am involved in less sports and eat less meat these days J

Elka: Our wedding (eight years ago) was the biggest challenge to date. I’m not Catholic, for starters, but it was very important to Thien’s family that we got married in a church. This meant that I had to take Catholic lessons from a homophobic nun, which ended in a huge screaming fight and my getting kicked out of Catholic school. While I’d have loved a small, simple wedding, our reception took place in a five-star hotel with hundreds of guests and a weird stage show involving flaming torches! Twice in the past year I’ve met people and said “Nice to meet you!” only to be told, “Actually, I was at your wedding.”

Thien: Being Vietnamese and growing up in Australia, I have always dealt with some cultural challenges, from eating odd-smelling food to performing traditional ceremonies such as praying for departed family members. These challenges have been more about not understanding these traditional behaviors, because once understood, it is generally accepted and sometimes enjoyed by all.

Elka: I think our kids will grow up to have so many options on where and how they would like to live. They are lucky to have been exposed to different people, places and cultures from a young age.

Thien: Taking the best aspects out of Vietnamese, Australian, Canadian, English and German cultures and incorporating them to make our lives more fulfilling.